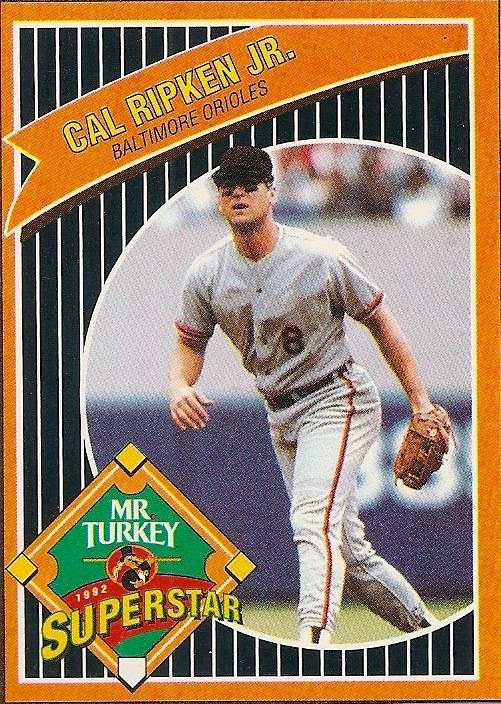 The Orioles celebrated the 15th anniversary of Cal Ripken's 3,000th career hit with a 7-5 win over the Yankees, allowing them to take the three-game set before heading to Boston. I'm celebrating by posting yet another oddball card of Junior, this one courtesy of Max. I've never seen a Mr. Turkey card before this, but the prominent orange and black coloring allows me to forgive the presence of pinstripes in the background. There's also so much going on with the design that I barely noticed the absence of the Orioles logos on Cal's cap and jersey. The back of the card features the obvious factoid, something about Cal not sitting out any games since 1982, under the excellent heading "Let's Talk Turkey".

Do you remember where you were when Cal roped a single to center field against Hector Carrasco at the Metrodome? I was in London on spring break as part of a school-sponsored educational trip. I was actually able to catch highlights of the milestone hit on TV in the hotel room, which was unexpected. Usually if I found televised sports coverage in the UK at that time, it was soccer (football, if you will) or snooker.
Posted by Kevin at 10:43 PM

That happened 15 years ago already? Jeeze man. Stop this train.