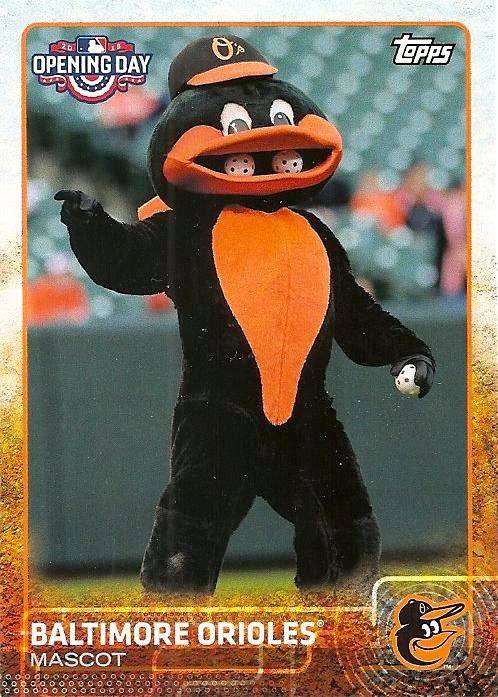 Today was a pretty good day, and not just because Max sent me my first batch of 2015 Orioles cards, along with a handful of other O's goodies. I also attended tonight's O's-Blue Jays game with my wife and my sister, hoping to get a mulligan on yesterday's chilly home opener and lackluster 12-5 loss. We collected our promotional giveaways at the gate - nifty 2014 American League East Champions wall art - and settled in on a cool but clear night to see Ubaldo Jimenez turn in one of the best pitching performances of his career. Last year's free agent bust looked like a new pitcher, breezing through seven innings of one-hit, one-walk, eight-strikeout ball against a tough Toronto lineup. The lone hit he allowed was a fourth inning flare single to left field by Jose Reyes that hit the grass just in front of a diving Alejandro de Aza.

No harm done, especially since de Aza had given Ubaldo an early lead with a leadoff homer onto the right field flag court in the bottom of the first inning. The power display didn't stop there, as Chris Davis blasted a solo shot to the opposite field later in that inning, his first round-tripper since last September 6. But the big blow came off the bat of Jonathan Schoop, who boomed a grand slam to left field to break things open in the fifth inning. That made the score 7-0, and it stayed that way until Edwin Encarnacion spoiled the shutout by sneaking a run-scoring single underneath the glove of shortstop Everth Cabrera with two outs in the ninth. But Zach Britton came back to retire Josh Donaldson on a grounder to finish off the Jays, 7-1. That's more like it.