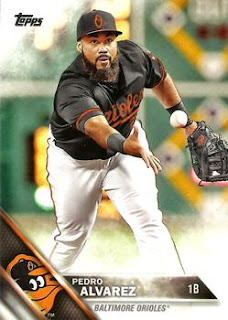 I hope you could forgive my pessimism as the Orioles staggered into Yankee Stadium last Thursday in the midst of a five-game losing streak. A four-game weekend series against the powerful New York lineup did not seem like the prescription for what ailed the Birds. So naturally, the O's took three of four from the pinstripers, including a pair of bizarre extra-inning contests:

-Friday's game stretched into the wee hours of Saturday morning, as it took 14 innings and nearly five and a half hours for the Birds to escape with a 7-3 victory. It looked like a Mychal Givens wild pitch would end it in the bottom of the eleventh, but Caleb Joseph chased down the ball and tossed it to former shortstop Givens, who slid into home plate just ahead of baserunner Didi Gregorius and tagged him out. After an umpire review, it was determined that Givens had not obstructed Didi's path to the dish. That set the stage (eventually) for Pedro Alvarez's grand slam to provide the winning margin.

-After dropping Saturday afternoon's game, the Orioles sealed the series win with a rousing comeback on Sunday. Mike Wright put the O's in a five-run hole in the first inning, but a pair of two-run homers by Anthony Santander (his first as a big leaguer) and Danny Valencia helped Baltimore briefly take the lead in the top of the seventh inning. The Yankees tied it up in the home half of that inning, and it remained a stalemate until the top of the twelfth. That's when Craig Gentry's two-out single through the left side of the infield plated Pedro Alvarez. 8-7, Orioles. The drama persisted in the Yankees' final ups, with Brad Brach walking two batters and mishandling a Brett Gardner bunt to create a bases-loaded, no-outs jam with sluggers Aaron Judge and Giancarlo Stanton due to hit. Judge tapped a grounder back to the mound, with Brach, Caleb Joseph, and Tim Beckham collaborating on a deft 1-2-5 double play to wipe out the two lead runners. Then Brach earned the save by striking out Stanton swinging, the fifth K of the day for the 2017 MLB home run leader.

In recent years, the Orioles have made a habit out of proving their detractors wrong. If they want to keep it up in 2018, it is absolutely alright with me.
Posted by Kevin at 10:58 PM

I'll take every win and treasure it. What a crazy weekend that was!

Bob - It makes you wonder, if the O's won 75% of their games against the Yankees this year, could you call it a success, regardless of their performance otherwise?