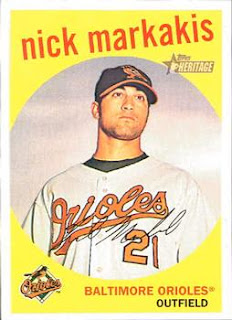 1. The Orioles' Opening Day win wasn't the only game on Thursday to end with a walkoff home run. Our old friend Nick Markakis, owner of 166 career homers and 2,056 base hits, clubbed the first game-ending round-tripper of his 13-year career. He really made it count, breaking a 5-5 tie with two outs in the bottom of the ninth with a three-run shot. (Incidentally, I might just mention the O's Opening Day victory in each and every blog post until they actually win another game...hurry up, guys.)

2. Last Saturday I visited the Baseball Card Outlet for the first time in a year. I'd love to drop in more often, but when I start rooting through their bargain vintage boxes, a dollar or two here or there adds up in a hurry. I pried myself away after picking up 30 late 1950s Topps cards, including a 20-count from the 1959 Topps set that I've been chipping away at for several years. Now I have 444 of the 572 cards in that set, a cool 77.6% completion rate. So I'm almost as close to finishing that 60-year-old set as I am to completing the 2008 Topps Heritage set that pays tribute to it. Of course, there are no Mickey Mantles and Willie Mayses lurking out there for the Heritage set...so it's mostly an uphill climb from here.
Posted by Kevin at 9:36 PM

Well, tonight was the first game the Orioles have played in Houston that I've ever missed. But watching on TV it's obvious that I'd have been unhappy in that crowd anyway. Outside of Rich Dauer throwing out the first pitch it was a miserable night.

But I'll be there Tuesday and Wednesday. I hope we show signs of life.

Kevin, can you send me your 1959 want list? Rkrolewicz@roadrunner.com

Last night on MLB they kept showing the great catch Nick did. They kept saying that 84% of players would not make that catch but ole Nick did. Miss him out in right field.


Comment for Bob what makes it worse it the Orioles at this moment have the lowest batting average in all MLB at a ugly .188 Boy it seems like a long season already. The other thing is what Buck said as spring training broke. We should be OK if our pitching holds up. You are right Buck but at the moment our hitting is quite anemic.

Bob - Best of luck this week! My next game is next Wednesday vs. Toronto, and sadly it's a 7:05 pm start so I don't think I'll be taking my good luck charm.

RK - I'll double check my want list tonight and send it your way.

Alan - Four games in, and the O's don't have a run against an opposing starter yet. Yikes.