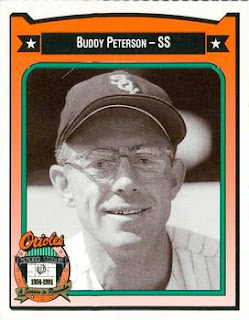 There are 501 cards in the promotional "All-Time Orioles" set, which of course gave enterprising collectors a card of each and every player who donned orange and black from the team's arrival in 1954 through the beginning of the 1991 season. With this post, I've featured 83 of those cards on my blog. Maybe I'll hang it up for good if I ever get around to all of them.

Anyhow, I plucked this card out of obscurity today because Carl Francis "Buddy" Peterson was born on this date 93 years ago. I figured that I might as well try to fill in one of the gaps in my knowledge of the team's early history. A native of Portland, OR, Peterson was in his ninth professional season when the White Sox purchased his contract from the Pacific Coast League's San Diego Padres club in the summer of 1955. The 30-year-old batted .306 with a .374 on-base percentage in 154 games that year with the Friars, and got a taste of the big leagues with Chicago in September. He actually debuted against the Orioles, hitting a single off of Jim Wilson while batting for pitcher Sandy Consuegra in the eighth inning of an 8-2 O's win on September 14. That was the first half of a doubleheader at Memorial Stadium; he started the nightcap at shortstop and went 2-for-5 with a walk, an RBI, and two runs scored from the leadoff position to help the ChiSox earn a split. In all, Peterson appeared in six games with the Pale Hose, batting .286/.400/.333 with seven runs scored.

Despite this favorable introduction to the majors, Buddy spent all of 1956 with Chicago's AA affiliate in Memphis, hitting .279 with a slugging percentage of .393. The Orioles acquired him that offseason, and sent him back to his old stomping grounds in the PCL, where he batted .298/.368/.420 with a career-best 38 doubles for the Vancouver Mounties. Again, he got a late-season cameo in the bigs, but hit safely just three times and walked twice in 19 tries for a .176 average. He kicked around in the PCL for three more seasons afterward without making it back to MLB, and capped his playing career with three years in Japan, batting .272/.340/.462 with 58 homers and 186 RBI for the Nankai Hawks. So in summary, Buddy Peterson played pro baseball for 17 seasons and some 2,375 games, including 13 games at the sport's highest level.

Post-playing career, Buddy managed in the minors for the Mets, Royals, and Athletics, posting an overall record of 295-285 in six seasons. He also worked briefly as a scout for Kansas City and Oakland. Peterson died at age 81 in 2006 due to complications from a stroke.
Posted by Kevin at 3:43 PM

I have always fancied these cards and have said I have to look for a set but how many years later and I still do not have. Will probably have to use my social security check to find one