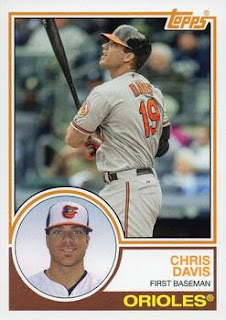 One week into the 2018 season, Chris Davis has gotten off to a start that is...to use the scientific term, hot garbage. He has two singles in 25 at-bats, has walked three times, and struck out six. That's an .080 batting average and a robust .258 OPS. He's now whiffed 1,208 times in 908 games as an Oriole, bringing him within 97 K's of the franchise record that it took Cal Ripken Jr. 3,001 games to set. I'm not saying that Chris Davis should get all of the blame for the team's ooooogly 1-5 start, but he sure isn't helping. But hey, he's got four more years on his contract after this season to make it up to us. No, I'm not screaming. It must have been you.
Posted by Kevin at 9:41 PM

I really like Chris Davis. He seems like a good guy, appears to do a lot of community good works, etc. But having said that I found myself wishing there was a way the O's could get rid of him as I sat in the stands Tuesday night. He looked hopelessly inept in the series here in Houston. I can't believe he's the same guy who hit those ridiculous moon shots just a few years back.

When Chris had that remarkable year which does not always mean it will be repeated he was awarded with a ridiculous contract only because Angelos thinks of him as a son.
I choked when I saw that and said there goes the bottom line and even thought I like him like Bob says but we could have gotten more in his stead. If it was this year the way things went during the off season the contract would not have been that large.
Sad thing is if we were able to move him at this point what would we get.

I love Chris Davis so much and it just hurts watching right now. His K's were down a bit to start the season, at least. If he can ever find that rhythm again...

The other thing I will say about Chris is when he swings and hits one like last night it seems so effortlessly. Not that power swing of other players where they look like they are coming out of their shoes.