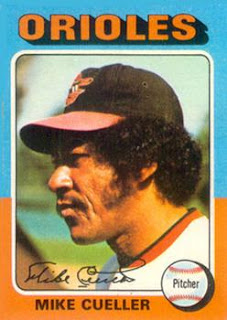 2808 career innings in the major leagues. Four All-Star seasons. A World Series ring. A Cy Young Award. 185 career wins, including four seasons with at least 20 and seven with at least 15 W's. A lifetime ERA of 3.14 in the regular season, and 2.85 in a dozen postseason starts. Heck, he even holds an obscure record: most home runs hit by a player with a career on-base percentage below .130 (seven homers, .128 OBP).

...All of this, and Topps couldn't manage to spell his name correctly on this card near the tail end of his career. It's C-U-E-L-L-A-R. No respect, I tell ya.
Posted by Kevin at 9:15 PM

Topps being Topps. As I recall they spelled it wrong on an Archives card as well.

BTW...was that an amazing Friday nite game or what?

Topps cards even growing up in the 50's to me was the holy grail of cards they could do no wrong even if they did. Kind of like Lionel Trains was the holy grail of trains. Now there are about 1/2 dozen other manufacturers and we do find the flaws
Wonder if Mike collected a few just for fun