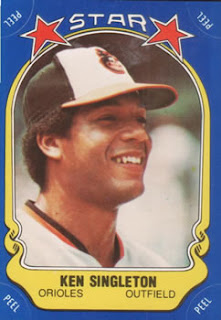 To close out a mostly forgettable April in Birdland, here's a belated mail day! Late last week, I got an envelope from Max, who'd found a few more cards that he'd meant to include in the larger stack he sent earlier this month. It included several 2018 Topps Opening Day O's (one of them being my first Chance Sisco card), four 1981 Fleer Star Stickers, and an all-gold Brooks Robinson card that some cursory searching tells me is probably from a 1996-2003 Danbury Mint set. Now that's an impressive oddball!

Ken Singleton, by the by, has announced that he will be retiring from broadcasting after the 2018 season. Singy has been calling Yankees games on the YES Network for 22 years now, to the chagrin of Orioles fans. However, in my limited experience with YES telecasts, Ken at least brings a bit of class and sanity to the proceedings. In that sense, the 70-year-old former All-Star will be missed.
Posted by Kevin at 9:35 PM

I've banned myself from watching YES games for 3 or 4 years now. I don't miss it. Only Singleton makes me reconsider my decision. But since he's on record as liking the Yankees, it doesn't keep me up at night.

Good to hear from you, night owl! There are enough good PBP and color guys across the league that there's no reason to subject yourself to Yankee broadcasts, I agree.

Singleton really isn't the only one on any Yankees broadcast that isn't a goon or a stooge or both. Kay, Sterling, Cone, O'Neill, all garbage and borderline ear-rapists.