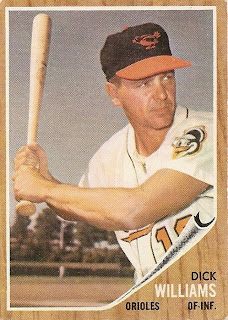 Considering the circuitous route of Dick Williams' playing career, I'm sure he never imagined that he would be inducted into the Hall of Fame in 2008. Before becoming the manager of the Athletics dynasty of the early 1970s, the gruff St. Louis native was a baseball vagabond, a man without a team or a position. He switched teams seven times in an eight-year span from 1956-1963, including three separate stints with the Orioles. He passed through the Houston organization during the 1962-63 offseason, never playing a single game for the then-Colt .45s. The list of players he was traded with and for includes Gene Woodling, Dick Hall, and Larry Doby.

When Williams did get on the field, he had to fill in wherever he was needed. He logged over 100 career games at four different positions: third base, left field, first base, and center field. He hunkered down in right field for 52 games and at second base for another 20. On three occasions he played all six of these positions in a single season. Considering all of this movement, Dick would have been forgiven for being a bit distracted when he came to bat. However, he hit a solid .260 overall with good power: three double-digit home run seasons and two straight years of 30-plus doubles.

Today, no one thinks of Dick Williams as a player. His 1,571 managerial wins dwarf his on-field exploits. But he did plenty of things well with the bat and the glove, which helped him stick around for 13 years. He certainly paid his dues over sixty years in baseball to earn his bronze plaque.
Posted by Kevin at 9:59 PM

Nice card. I was fortunate enough to acquire a signed Dick Williams card recently and it is definitely a great addition to my collection.