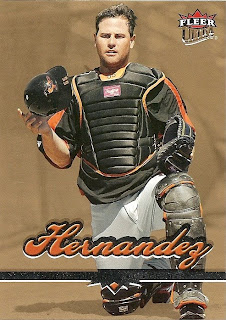 Catcher Ramon Hernandez has just become the latest ex-Oriole, having been traded to the Cincinnati Reds with a million dollars cash for utility player Ryan Freel and two minor league infielders. It's a shame that most fans, myself included, are expressing nothing but relief at his departure. But that comes with the territory. After signing a lucrative four-year deal with the Birds prior to 2006, the former Padres backstop started strong (.275 with a career-high 23 home runs and 91 RBI), but the last two years were full of questions about his conditioning and his effort. His offense slipped and his defense...well, what's Spanish for "passed ball"? Now local reporters are talking about the frustration felt by Ramon's teammates over his increasingly predictable game-calling. Manager Dave Trembley was fairly transparent as he emphasized Ramon's hitting potential and said nothing about his defense when attempting to talk him up last week. This might just be addition by subtraction. Best of luck to Ramon in Cincinnati. I'm sure his game will improve with a change of scenery (not to mention a hitter's ball park) and a contract year...but then again, I said the same thing prior to the 2008 season.

I'm somewhat excited about Ryan Freel, mostly because of his reckless, all-out style and the stories about Farney. But I'm not fooling myself. Freel is a spare part, the two prospects are not blue-chippers, and this trade is largely a salary dump. However, it's a significant move. The path is clear for our #1 prospect, catcher Matt Wieters, to join the Orioles in 2009. There's talk of signing a cheap veteran like Gregg Zaun to ease the transition, but the future is closer than ever.
Posted by Kevin at 9:08 PM

When I saw this deal on the bottom line you're actually the first person I thought of. I like Ryan Freel and think he's a good addition to any team.

Farney? That's classic. i can think of a few other recent Birds that acted as if there was someone else inside their heads.

Matt Weiters could be the real deal. It's better to go ahead and give him a shot now to see what he can do. It worked for McCann...