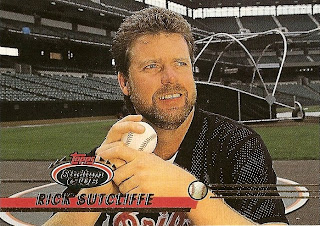 This week there has been a startling lack of viable options on television. Tonight I was bailed out by an old standby: Orioles Classics on MASN. The featured game was the first opener at Oriole Park at Camden Yards: Monday, April 6, 1992. As I was gazing at a patchwork lineup that included the immortal Sam Horn, a mulleted Billy Ripken, and Leo "Lay-o" Gomez, I found myself wondering how in blazes that particular team won 89 times. But then again, I suppose having actual, real-life pitchers helped a lot. In this particular game, the veteran free agent made his Orioles debut in stunning fashion, helping his new team christen their ballpark with a 2-0 win. He plowed through the Indians lineup (featuring Carlos Baerga, Kenny Lofton, and Albert Belle) in two hours and two minutes, allowing five hits and a walk while striking out six. Only two Tribers reached second base, none after the fifth inning. After a decade of suffering through overmatched pitchers who are praised for "eating innings" and "keeping the team in the game", I'd give anything to see a game like that some time soon - a live game.
Posted by Kevin at 11:35 PM