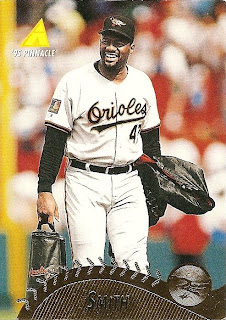 It's that time of year again; Hall of Fame ballots have been mailed. The older I get, the more disillusioned I become with the selection process. The Baseball Writers' Association of America is an exclusionist, flat-Earth society and too many writers treat their vote like a joke. After Woody Paige's admission that he picked Goose Gossage because he was nice to him, and the mere fact that somebody voted for Todd Stottlemyre, I can't begin to predict how badly the BBWAA will screw up the Class of 2009. But this is first and foremost a baseball blog, so let's talk shop. The former Orioles on this year's ballot are Harold Baines, Jesse Orosco, Tim Raines, and Lee Smith. All four had long and remarkable careers, but they are not all Hall-worthy.

Harold Baines is one of my favorite players and by all accounts a first-class human being, but he was never head and shoulders above his peers- never great. Regrettably, knee injuries robbed him of his speed and made him incomplete. He was an impressive hitter, but he didn't put up the sort of numbers necessary to gain entry to the Hall as a one-dimensional player.

Jesse Orosco is notable primarily for his longevity. Making a living as a major league pitcher for 24 seasons is nothing to scoff at, but he was a highly specialized role player for much of his career, not even averaging an inning per appearance in any season from 1991-2003.

Tim Raines meets my criteria for the Hall of Fame. He was one of the premier leadoff hitters of the 1980s, getting on base at an impressive .385 clip, and his 808 stolen bases are fifth all-time. I doubt he'll get in this year, since Rickey Henderson is on the ballot and voters will want to compare the two, but that's apparently the nature of this beast. He might also be hurt by memories of his admitted cocaine abuse in the Eighties, but he's long since rehabilitated himself and there are plenty of worse scoundrels enshrined in Cooperstown (see: Cobb, Tyrus).

In my opinion, Lee Smith also passes muster. In an era when closers are finally gaining entrance to the Hall (Eckersley, Sutter, Gossage), you can hardly exclude the man who amassed a record 478 saves, a mark since surpassed by Trevor Hoffman. The barrel-chested, long-legged Cajun struck out 2.5 batters for every walk in his 18-year career, and his 131 adjusted ERA+ (which accounts for home ballpark and league averages - 100 is average) was better than the figures for Goose Gossage, Rollie Fingers, and Dennis Eckersley.

So if I had my way, two ex-O's would be headed to Cooperstown next summer. They may not have spent much time in Baltimore, but they're a part of our history nonetheless.
Posted by Kevin at 9:39 PM

I think Lee Smith will eventually get in. Probably Tim Raines eventually, too. And Woody Paige should be kept as far away from a ballot as possible. In fact, he should find an entirely different line of work period.

We're in total agreement on Woody Paige - the guy should be an embarrassment to any writer worth his salt!