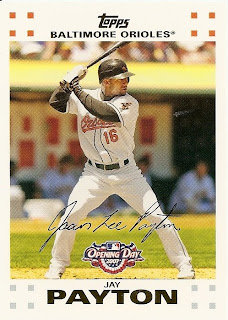 The baseball offseason can be a bittersweet time of year. While it may be easy to get caught up in the so-called Hot Stove League, constantly checking sports websites and blogs for the latest rumors about which free agent signings and trades your team might make, you might overlook the fact that several players that you spent the last year or more following and rooting for are being shown the door.

All around baseball, several players are now looking for new homes. Last night was the deadline for teams to offer their free agents arbitration. You can still negotiate with your free agents after this deadline, but for all intents and purposes, this is a kiss-off for those who are not offered arbitration. That's certainly the case with the four Orioles who were in this boat: Alex Cintron, Juan Castro, Kevin Millar, and Jay Payton.

Cintron and Castro weren't even with the club for a full season, and as two-fifths of the Great Shortstop Horrorshow, they'll barely be missed. I thought Cintron had promise as a capable hitter, even though he was a butcher in the field, and I liked that he wore #13, my favorite. I was also there for the home run he hit in the sweep game of our interleague series with the Astros. That Juan Castro was an option at short speaks to the absolute dearth of talent the O's had at the position. He was a thirty-six year old with a career average of .230 who managed to underperform even that low mark (.205 in 54 games in '08), and he became the de facto starter in the second half. No matter how smooth his glovework may have been (and it was smooth), that dog don't hunt. Adios, Alex y Juan.

Kevin Millar I will truly miss. He is the best clubhouse guy in the major leagues, someone who had the guts and humor to predict a World Series trip after ten straight losing seasons. He was the brains behind the "Oriole Magic" video that made every home win a little sweeter. Kevin took enough walks to pull his own weight and had some pop in his bat (17 HR and 20 HR in his two seasons here), and he was underrated and surprisingly nimble at first base. Plus, he killed the Yankees (.344 with 10 HR in 2007-08). But an MLB team can't afford to start a terribly slow .234 hitter at first base every day, and Kevin is reluctant to accept a reduced role. See you around, One-Five.

Jay Payton never really fit in here; much like the obviously Photoshopped picture up above, something wasn't right. He was really emblematic of the desperate personnel decisions that plagued the last decade of Orioles baseball. He came to the Birds as a 34-year-old free agent journeyman with a checkered history: an injury here, a burnt bridge there. But the front office seemingly zeroed in on his .296 average in 2006 and the mere fact that he was willing to take their money, and thus JayPay was a five million dollar man. In his two years in Baltimore, he failed to get on base at a .300 clip, and couldn't even slug at a .400 pace. But he wasn't much of a headache as far as I know, and his grand slam off of Hideki Okajima early in 2008 was a rare bright spot against the insufferable Red Sox.

There you go. Four more players are essentially ex-Orioles, and I found something nice to say about each of them. Best of luck, fellas.
Posted by Kevin at 11:19 PM