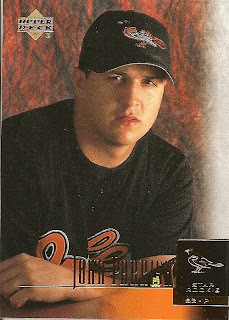 I always thought that pitcher John Parrish resembled comedian Harland Williams. What do you say? One thing is for sure - he gave the Orioles tantalizing glimpses of what could have been, if only he had stayed healthy and pitched with more control. Those are pretty big ifs, of course. But I'll always remember his debut in July 2000, when the former 25th-round pick from Lancaster, PA stood toe-to-toe with Roger Clemens. Though he lost a 4-3 heartbreaker, he actually outpitched a man who would win 354 career games by striking out nine Yankees in seven innings. He also seemed genuinely moved by the rousing ovation he received on Opening Day of 2007, when he made the O's roster after missing a year and a half with injuries. He was incredible out of the bullpen that April, notching ten straight scoreless appearances with 13 strikeouts and just two walks.

This past May, my Dad and I were in the right field bleachers at Oriole Park for a surprisingly chilly Friday night game with the Nationals. I overheard a guy behind us talking about what a friendly, down-to-Earth guy John Parrish was. He had apparently chatted him up prior to a Spring Training game a few years earlier in Fort Lauderdale, and the lefty invited the guy to go out drinking later that night with a few of the O's. I don't remember who else ended up being part of the outing besides Nick Markakis, who was headed into his rookie season. But in this era of closely guarded public images for athletes, it's nice to hear about a player raising a few glasses with the little people that help to pay his salary.
Posted by Kevin at 8:33 PM

John Parrish also has a perfect game to his credit if I am not mistaken. The Perfect Game was in bowling however.