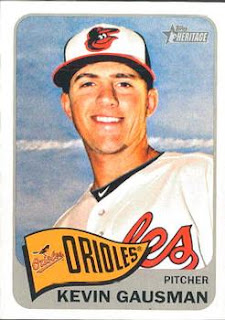 My nascent Camden Yards win streak may have been cut short at three with last night's 2-1 heartbreaker, but that doesn't mean that there weren't any memorable moments. On a personal level, my sister and I won the team's seat upgrade promotion. Since the paid attendance was a cozy 10,614, and the actual number of butts in seats was significantly less for a Monday evening game in April, I encouraged Liz to text our seat location to the promotional number. I figured the odds were in our favor, at least moreso than they've ever been before. So wouldn't you know that when I returned from a third-inning beer run, she was in possession of two tickets for Section 37? I'm quite fond of our usual vantage point in Section 340, but it was nice to be a bit closer to the action. Plus, it's always a cheap thrill to see yourself on the scoreboard. Here's a crummy picture of our upgraded view, courtesy of my iPhone. 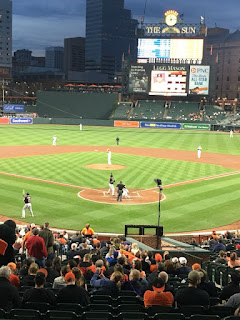 As you can see, we were right below the press box, in the last row before you reach the box seats. That meant that we had an excellent view of Kevin Gausman's historical seventh inning. Gausman was a hard-luck loser last night, allowing two runs on four hits in eight innings, with seven strikeouts against just one walk. Yonder Alonso's second-inning homer held up for the Indians, since the O's flaccid bats couldn't produce anything beyond Chance Sisco's second-inning RBI single.

Anyhow, I was pleased to see Gausman mow down Alonso, Yan Gomes, and Bradley Zimmer in order in the top of the seventh. It was all the more impressive because he struck out the side. But I didn't realize until I read the recap this morning that he disposed of all three Cleveland batters on three pitches apiece. It's come to be known as an "immaculate inning", and despite the increasing frequency of strikeouts in today's MLB, it's still pretty rare. There have been 90 such innings on record, making it a less common occurrence than a cycle or a no-hitter. 85 different pitchers have had a three-K, nine-pitch inning, including a record high of eight last season. (Sandy Koufax had three of them.) Kevin is the first pitcher to throw an immaculate inning in 2018, and the first Oriole to do so since B. J. Ryan blew away Manny Ramirez, Jim Thome, and Richie Sexson on September 5, 1999. I guess there's just something about the Indians.

I'm glad to know that I witnessed a little bit of history...even if the significance escaped me at the time.
Posted by Kevin at 11:28 PM