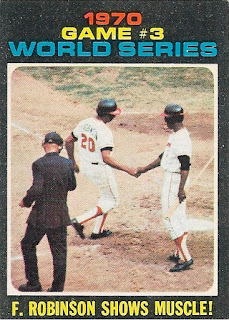 I've spent most of my evening watching other teams play postseason baseball, but nobody looked as good doing it as Frank Robinson did with his high, skinny orange stirrups and his contrast-colored, radial-arched name plate. Even home plate umpire Tony Venzon and number five hitter Paul Blair have to give Frank a once-over to take it all in. I hardly need to tell you that the Orioles dispatched the Reds 9-3 in this game, which took place on October 13, 1970 in Memorial Stadium. The O's only outhit Cincy by a 10-9 count, but three of Baltimore's hits left the field of play, and none of Cincinnati's did. Robby and Don Buford each hit a solo homer off of Tony Cloninger, and winning pitcher Dave McNally really blew the game open in the bottom of the sixth with a two-out grand slam off of reliever Wayne Granger. Perhaps buoyed by his rare feat, the Birds' tough lefty went the full nine innings to give his club a 3-0 advantage in the 1970 World Series. The whole thing took just two hours and nine minutes, which probably has something to do with the lack of three-minute commercial breaks between innings. Crazy, I know.
Posted by Kevin at 11:52 PM

Those were some very good Orioles teams back in those days. They won the World Series in 1970, and they also beat the Dodgers in the 1966 series and loss to the Mets in the 1969 series. The Orioles finished first in the American League Eastern Division in 1971 and won the American League championship but loss the World Series to the Pirates. They had four World Series appearances in six years, winning the series twice. Along with Frank Robinson, he was joined in the outfield by Paul Blair and Don Buford. Then there was Brooks Robinson at 3rd base, with Mark Belanger and Dave Johnson manning shortstop and 2nd base, and Boog Powell at 1st. Along with Dave McNally, they also had Jim Palmer and Mike Cuellar (beginning in 1969) as starting pitchers. They came back to win the American League Eastern Division championship in 1973 and 1974 only to lose the American League championship series to the A's. That's a pretty good run.

...and no idiots re-adjusting their gloves after taking a pitch.