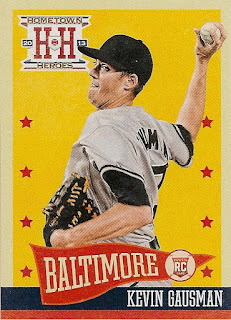 I saw a fantastically entertaining game last night at Camden Yards. It breezed by in two hours and 23 minutes, thanks in large part to Kevin Gausman's dominant performance. He struck out 10 Toronto hitters in eight innings, allowing a solo home run to Darwin Barney (out of pity, I suspect) and no more. For the first six innings, the Baltimore hitters made their own contribution to the brisk pace by scraping together a scant two hits against Blue Jays starter R. A. Dickey and reliever Ryan Tepera. But in the home seventh, the Birds broke loose. Manny Machado led off with his 31st home run of the season, and Chris Davis made it back-to-back blasts with his 44th of the year and his career 200th. A J. J. Hardy RBI single and a two-run double by Nolan Reimold capped the five-run inning. The milestones kept coming in the bottom of the eighth. Davis went deep again - his 159th as an Oriole, moving him past Melvin Mora for tenth-most in team history. Two batters later, Matt Wieters crushed a two-run homer, the 100th of his career. Altogether, it added up to an 8-1 trouncing of the front-running Jays.

There was another game earlier yesterday, but I don't remember what happened in that one.