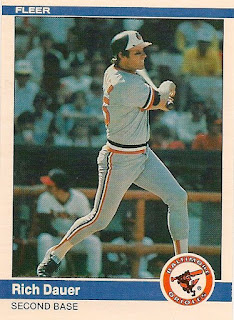 Congratulations to the Houston Astros, who have a date in Kansas City for Game 1 of the ALDS after dispatching the Yankees in the Wild Card Game by a 3-0 margin. There are no former Orioles on Houston's postseason roster, since Scott Feldman is injured and L. J. Hoes spent most of the season cooling his heels at AAA Fresno. But there are still some familiar faces in the navy blue and orange. Rich Dauer mans the first base coach's box for the 'Stros, after spending the previous two seasons managing San Diego's AA San Antonio Missions club. Ex-O's infielder Enos Cabell is a special assistant to GM Jeff Luhnow, and one-time Baltimore pitcher Dyar Miller is the Houston organization's minor league pitching coordinator. It goes without saying that I'll continue moonlighting as an Astros fan in the Division Series; there's no way I'm letting bygones be bygones so soon where the Royals are concerned.

Yesssss! May the luck of the Brotzman lead us to the pennant!