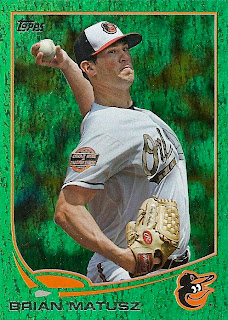 I got an unexpected mailing from Max today, complete with the shiniest greeniest something I've ever seen. This is one of the 4,192 parallel inserts in 2013 Topps, and it features the Orioles' newest relief ace in a special camouflage jersey. Sure, Brian Matusz took a tough blown save yesterday against the A's, but he entered the game with the bases empty, ensuring that his season-spanning streak of stranding inherited base runners continues into another week. The lefty has prevented all 24 inherited runners from scoring since being switched to relief midseason last year. For his career, Brian has a 2.22 ERA, 0.70 WHIP, and 10.7 K/9 IP in 29 games as a reliever; in 68 big league starts, he has a 5.51 ERA, 1.56 WHIP, and 7.1 K/9 IP. The O's may not have drafted Matusz fourth overall planning to use him as a high-leverage reliever, but it's better than being a bust. They're still getting some value out of the 2008 first-rounder, which is more than you can say about many of the top draft choices that preceded him in the organization.
Posted by Kevin at 9:16 PM