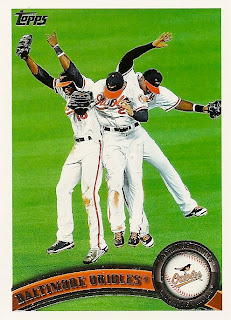 I realize that this triumvirate of Oriole outfielders are not doing anything unique in their victory celebration. Often, when I see Felix Pie, Nick Markakis, and Adam Jones leaping into one another to form a human asterisk, I worry instinctively that one of them will land just wrong and blow out a knee. All the same, I could watch them do it every day. I would even settle for watching them do it 100 to 110 days out of the year.

All three guys are extremely fun to watch play. Felix has spent most of the last month serving as Luke Scott's legs and glove in the late innings, but his good friend's balky shoulder might give him more of an opportunity to see the field. With last night's game going 13 innings, Pie played roughly half of a regular game, and played a prominent role in much of the drama. With the go-ahead run on base in the ninth inning for Seattle, the left fielder sent it to the tenth with a running grab of a short liner by Miguel Olivo. He continued running off of the field in goofy, loping strides, clearly enjoying himself. He was even more animated in the next inning, throwing a bit of an elbow into Justin Smoak as the Mariner first baseman tagged him out on his way down the line. Smoak responded in kind, and Pie lost his temper, getting right in the towering slugger's face and shouting some probably unkind words. The umpires and O's first base coach Wayne Kirby got in the middle of the conflagration, defusing it even while the bench and bullpen were emptying. The Birds were trailing 6-5 when Felix came to bat three innings later with two runners on base. His bounding single up the middle plated the tying run, and two batters later he raced home ahead of Michael Saunders' throw and Miguel Olivo's tag to score the game-winner.

Markakis has not had an ideal start to the season, with an extended slump pushing his average near the Mendoza line and blunting his run production. What's more, he missed his first game of the year tonight with the flu. But his defense certainly hasn't slumped, and he teamed with Brian Roberts and Matt Wieters to gun down Olivo at home in the top of the twelfth. He's also showing signs of life on offense; he was 3-for-6 with a walk last night and started the game-winning rally with a leadoff single. He's gone 12 for his last 36 with 4 RBI in the most recent 8 games, raising his average from .206 to .239. I have no worries about Nick.

Speaking of overcoming rough starts, there's Adam Jones. He matched Nick's 3-for-6 with a walk last night, and improved upon it with two doubles and three RBI. For an encore, he went 4-for-4 tonight with a two-run, two-out triple to put the Orioles up 4-1 in the fifth inning against reigning Cy Young winner Felix Hernandez. For fun with small sample sizes, Dr. Jones is batting .326 (29-for-89) since April 14 to boost his average from .189 to .286 in that span. He's been even better so far in May, clocking in at .436 (17-for-39) with 9 RBI in as many starts. Plus, I enjoy his Twitter feed even though I don't understand half of what he says.

I've said it before, and I'll say it again. The current crop of Oriole outfielders sure beats the days of Marty Cordova, Chris Singleton, and Jay Gibbons.
Posted by Kevin at 9:09 PM