Jason Berken, 2010 Topps When They Were Young #WTWY-JB 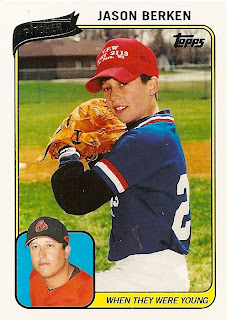 The card you see above came with today's mail as part of a trade with Randy Krolewicz, reader and friend of this little corner of the blog world. We had discussed a 2010 Topps trade, as I have plenty of dupes and still have some needs to fill from the Update Series. Though Randy wasn't able to fill any of those needs, he did have some insert cards featuring several Orioles. I noticed on Randy's website that he had some 1965 Topps available, so I figured it couldn't hurt to ask if he would be willing to throw one or two of those into the trade as well to even things out. He went above and beyond, including five of my 1965 Topps needs in a custom-made 1965 Topps "wrapper" and topping it off with a Boog Powell Gold  Embossed card from that year's insert set! Thank you for the early Christmas gift, Randy! If anyone else would like to talk trade with him, check out his website and drop him a line.

As far as this card in particular is concerned, it's somewhat reassuring to see that Jason Berken had to wear the same cheesy foam-and-mesh caps and uncomfortable polyester pullover jerseys that I did in Little League. Major leaguers aren't all that different from you and me...except for the $400,000 starting salary, of course.
Posted by Kevin at 10:46 PM

Tags: 2010 topps when they were young, jason berken

I've got a number of duplicates of the 2010 update series, if you're interested...

Kyle - I am indeed interested. I'll send you a want list, and let you know what dupes I have if you need any.

Kevin, Sending you the 1965 cards that I had in a box waiting to be possibly traded to someone sometime in the future is the least I could do for you. Your daily blog has kept me close to my favorite team and favorite hobbys (baseball and baseball cards). Here in Buffalo, NY, there is little coverage of baseball in the media, and when there is it is usually the hated Yankees, and definitely not the Os. So, almost every day, your blog fills me in on past and present Os. I truely enjoy it. I would think your local newspaper would want to print your daily card summaries. Thanks again Kevin for your blog, and the plug you gave me and my trading web site. - Randy