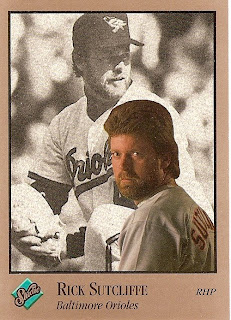 I was going to mock Rick Sutcliffe's mighty helmet of hair in this copper-framed Glamour Shot, but now I'm afraid of the consequences.

You see, I'm currently reading Cal Ripken, Jr.'s new motivational book, Get in the Game: 8 Elements of Perseverance that Make the Difference. It was sitting on the "free table" at work, one of the little perks that comes with working for a national publication. I tend to view rah-rah self-help books with skepticism, but this one has been a light, quick read with plenty of entertaining baseball stories to illustrate points. One of the funniest anecdotes involves big righthander Rick Sutcliffe.

As Ripken tells it, he and Sutcliffe were standing on the field in Cleveland; he doesn't give a date, but obviously it would have been during the pitcher's two-year tenure in Baltimore (1992-1993). Cal was having second thoughts about continuing The Streak; he was struggling on the field, and the increasing pressure from the media was wearing on him. So he asked for Sut's take:

"The obituaries-because I'm going to kill you."

Cal went on to mention that Rick was 6'7", making him the rare contemporary to tower over the O's shortstop, and that he wasn't smiling when he threatened Ripken's life. But Sutcliffe went on to compliment his teammate's stabilizing presence on the team, all of the things that he did to help the club win, slump or no slump. He told Junior to "stop your whining and go back to your job". Because he didn't sugarcoat his message, he got Cal's attention and helped him snap out of his torpor.

These days, that same direct, no-nonsense approach is probably serving Rick Sutcliffe well as he endures treatments for colon cancer. The early prognosis is good, as the disease has been classified as "curable and maintainable". "Maintainable" seems like an odd word to use to describe cancer. But if the above story is any indicator, I'd put my money on Rick Sutcliffe to come out on top.