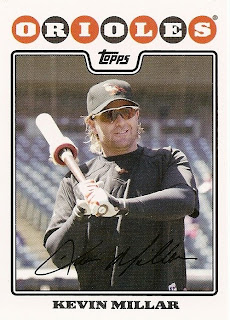 I hope you'll forgive me a little giddiness over the Orioles' surprise five-game win streak that has put them, however briefly, into first place. Baltimore has rarely been at the top of the AL East at any point in the season since 1998, so I am determined to enjoy this. I think the players are too, especially my namesake Mr. Millar. I've become a huge Kevin Millar fan since he arrived in Baltimore before the 2006 season, as his sense of humor and strong clubhouse character have injected some much-needed life and levity for the O's. Already this season, he has done the following:

2. Taken cheeseball Baltimore Sun sports columnist and Southern Cal alumnus Peter Schmuck to task for his pick of USC to win the NCAA Tournament (the Trojans were knocked out in the first round).

3. Thrilled the fans in Camden Yards by reprising his act from last Opening Day, when he imitated Ray Lewis' pregame dance.

4. Responded to questions about the fans' rough reception for Aubrey Huff by saying it was "hilarious", and claiming that he was booing Huff as well.

5. Celebrated yesterday's win by cranking up the hokey 1980's "Orioles Magic" theme song in the clubhouse, which led to several other players banging their hands on a wooden table to the catchy beat.

This is the perfect kind of team for Kevin Millar. It's a young team with rock-bottom expectations, a team that Millar and his partners and crime can instill with a loose, carefree attitude. The Orioles are winning right now because they don't believe that they're as bad as everyone insists they are; you might even say that they don't know any better.

I will always be a fan of Millar's not only because he is fun to follow, but because I got an autograph from him before a game last summer. I also noticed at least one other time that he was signing pre-game. Both were Sunday day games. Every team needs players like this, the Phillies have Jamie Moyer who I have seen sign countless autographs on days that he is not pitching. Kudos to both Kevin and Jamie - Go O's Go Phils.

Kevin was such a huge part of the 2004 Red Sox World Series team, it was sad to see him go although I don't necessarily blame the Red Sox for doing so.

He's had a hell of a start to the season, it's nice to see him enjoying some success.

This is great to know. I'm collecting Nice Ballplayers.

Patricia - When I was in Little League, Tippy Martinez was the guest of honor at our parade and couldn't have been nicer. I'll go into more detail whenever I post the card he signed for me.