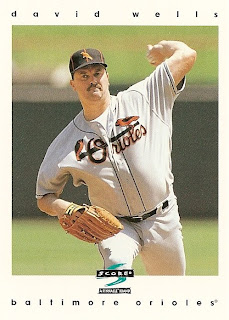 "All the fat guys watch me and say to their wives, 'See, there's a fat guy doing okay. Bring me another beer.'" - Mickey Lolich

I'd venture a guess that David Wells was a fan of Mickey Lolich in his formative years. Even though he's had his share of injuries in recent years, it's still pretty amazing that "Boomer" has been able to pitch into his forties while carrying so much weight. He's also surprisingly athletic for someone so large, as I've seen him spring off of the mound to field his position on balls hit in his vicinity.

I vaguely remember the game depicted in the above photo, as I believe it was a 1996 game in Arlington against the Rangers. I can't quite remember the occasion, but the two teams were wearing throwback uniforms. Rather than flashing back to the great American League O's teams of the 1960s and 1970s, on this date the club wore the threads of the 1930s and 1940s International League Orioles. During Major League Baseball's 53-year absence from Charm City, the minor-league O's were known for their enthusiastic fan base and consistently successful performances. The most famous Oriole of this era was Maryland native and eventual Hall-of-Famer Lefty Grove. Babe Ruth was also an Oriole, but that was an earlier incarnation of the O's in a different league. Believe it or not, the IL Orioles were affiliated with the St. Louis Browns from 1949-1950. Three years later, the Browns would move to the city of their former farm team!

That is a really sharp uniform, very distinct from anything the big-league Birds have worn. With the birds-on-the-bat, it's reminiscent of the St. Louis Cardinals, and the orange stripes and upright bird on the cap are also eye-catching. It's worth noting that when the Orioles first arrived in Baltimore from St. Louis in 1954, Bowman tried to guesstimate the new uniforms on that year's baseball cards. The result looked something akin to the minor league design. Amusingly (or perhaps infuriatingly, for us English majors), some of the cards showed the team insignia with an apostrophe in "Oriole's".

It's a rare treat to see an MLB team acknowledge a forgotten facet of their hometown baseball history like this. If you're interested in owning some IL Orioles gear, you can go here.
Posted by Kevin at 4:15 PM

ROTFL - Man, if I said that to my wife, she'd say something like, "Well, if you brought in the kind of money that fat guy does, then I'd get you that beer. Now, shut up and fix me a turkey pot pie!" :-)