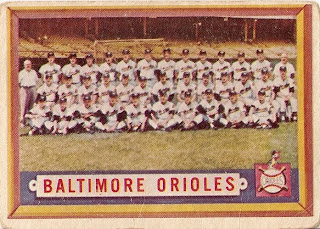 This is one of the oldest cards I own; it features the 1956 Orioles, who were in just their third season of existence. They were already showing signs of improvement, winning 69 games and losing 85. This was a 12-game improvement over the previous year, but left the fledging Birds in a distant sixth place, far behind fifth-place Detroit. Still, there was plenty to love about the team. Catcher Gus Triandos set new team records in home runs (21) and RBI (88), left fielder Bob Nieman batted .322 in 114 games, and the pitching staff was led by Maryland native Ray Moore's 12 wins against just 7 losses. Three members of the '56 O's would eventually gain entrance to the Hall of Fame: veteran third baseman George Kell, utility player Dick Williams (who was just elected last January as a manager), and a nineteen-year-old named Brooks Robinson. The young third baseman did not make it into this team picture, but he had something to show for his 15 games - namely his first major league home run. By the following July, he would be in Baltimore to stay.

There are a lot of things to love about this battered, blurry old card. The design is great, with a photo-album kind of feel: the wooden frame is augmented by the name plate design at the bottom paired with the vintage baby-bird-on-ball logo. Not only are the team trainers and bat boys pictured (which just doesn't happen on today's team cards), they're identified on the card back. The bat boys are Young (front row left) and Diering (front row right). I'm going out on a limb to say that the latter bat boy is the son of outfielder Chuck Diering, who played the last 50 games of his nine-year career that season. Oddly enough, Chuck is not even in the team photo! Also on the card back are the single season franchise leaders, an odd mishmash of brand-new Orioles marks and turn-of-the-century St. Louis Browns records. The most remarkable thing about this card may be the listed dimensions of Memorial Stadium: 309 feet down the lines, and 450 feet to straightaway center! It's no wonder that the O's hit only 91 homers in 1956.

I've never really cared much about team cards, but this one serves at a pretty interesting time capsule now that I've stopped to take a closer look at it.
Posted by Kevin at 8:36 PM