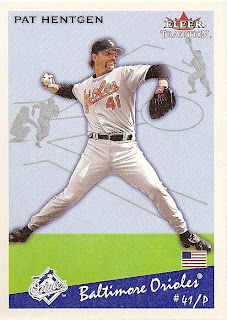 This card serves as a lasting tribute to Pat Hentgen's mustache. I used to call this style of facial hair a "fu manchu", but I've come to learn that a fu manchu technically hangs off of the chin like this. What #41 is sporting is properly known as a "horseshoe", but is also often referred to as the "Hulk Hogan" or the "Earl". For many years I yearned to grow a mighty Flavor Saver like that, but the only place that hair grew thickly and evenly on my face was on my chin. So the goatee became my calling card, but every once in a while I tried to branch out (particularly in college, when I just couldn't be bothered with shaving regularly). I usually gave up within a few weeks, because my upper lip and cheeks resembled nothing so much as a barber shop floor. I even convinced my Dad to shave his trademark beard down into a horseshoe for a brief period, so that I could live vicariously through him. I still maintain that it helped to intimidate his high school students into obedience.

Last year, I finally reached for the stars. I can't quite explain what compelled me to do it, but I spent the spring of 2007 patiently growing out a full goatee. I never got fully used to the way the mustache portion looked, and it never quite fully connected to the chin hair. But as it got longer and slightly fuller, I saw my opportunity. In June, I shaved my chin before my roommate's birthday party. I had finally arrived. Even better: as a sign of solidarity, said roomie crafted a horseshoe 'stache of his own. Still, he shaved his off later that night, while I reveled in my hirsute glory for a few more weeks. Below you can see my best attempt to channel Pat Hentgen, Al Hrabosky, Rod Beck, and all of the other greats (I'm on the left, of course, in my Orioles Spring Training tee).

I can sympathize with your tribulations growing facial hair. My job precludes me from growing anything beyond a neatly groomed mustache, not to extend beyond the edges of your mouth.

I sported one of these mustaches for a few years in my late twenties. How distinguishing was it - let me just say that when I finally decided to shave it off, my wife did not notice it was gone until a week later!

Kevin... thats a vintage Baltimore Colts pennant behind you guys, isn't it. Moment of silence please. The Colts were my first and deepest love.

Tim - In high school, we had a no-facial-hair policy, which probably explains my fixation on it.

Bob - I was fortunate enough to get that Baltimore Colts pennant (as well as a drinking glass) from my grandfather's old collection. When I moved in with my roommate (Yankees and NY Giants fan), he wouldn't have any part of the Orioles and Ravens pennants, but had no qualms about placing the Colts pennant in the living room.

Awesome 'stache. I went through a phase a few years ago when I thought I was a biker and tried the same thing. It looked terrible, but I still kept it for a few weeks.

That looks awesome! I can never grow mine to connect. Not even close. I bow down to facial greatness. :)