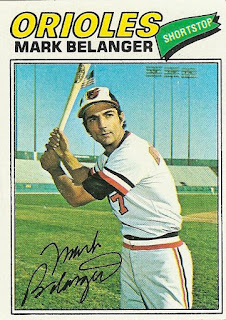 Wow. I didn't plan on a month of blogging silence, but then again, I'd forgotten what a colossal pain it is to move. Even as I write this, there are several boxes that need to be unpacked, and straggler items to be brought over from the old rowhouse. Then there's the matter of cleaning and maintenance on that house, so that we can rent it out for some extra income and...no, I'm not crying. Who said I was?

For the two and a half years that Janet and I (and our three cats and one dog) lived together under the roof of a much-too-snug 900-square-foot rowhouse, we would talk in far-off, dreamy tones about our "grown-up house" yet to come. For example: "In our grown-up house, we'll have enough cabinet space to store all of our pots and pans, instead of stacking them on top of the stove and storing them in the basement." Or maybe, "When we get a grown-up house, the master bedroom will have closets for both of us!" Yes, Janet's closet was in the spare bedroom/cat room/baseball card storage. Are you getting the picture?

Finally, enough was enough. We'd been talking for some time about growing our family, and the rowhouse was already too small for us and our four-legged creatures and all of our crap cherished belongings. There was no way another human, however tiny, would squeeze in there with all of its various and sundry accessories. In early August, we started the search in earnest. Let me tell you, I would not wish house-hunting on the worst of my enemies...not even Sidney Ponson. Each open house brought its own delightful surprises: overbearing real estate agents (Who argues with a potential buyer when they complain about smelling cigarette smoke?), slap-dash renovations, creepy basements...and wood paneling. So much paneling. I think one house in particular was sponsored by 84 Lumber. On one of our first days out, we did meet a realtor we liked enough to hire on as our buyer's agent. So she helped keep us on-task and dealt with selling agents so that we didn't have to do it ourselves.

Early on, we zeroed in on a completely renovated rancher with a fully finished basement that Janet and I both loved. After comparing and contrasting it to a few dozen more available homes, we decided to act; our agent had told us that there was another offer pending. After the three of us scrambled all night to put together a competing offer, the seller accepted the first offer - apparently without knowledge of our offer. Exactly what happened is unclear, but at the very least it was a breakdown in communication, and it was very discouraging. Have you ever been sniped on eBay? Well, it was like that, only with much higher stakes. I don't recommend it.

Though we might have found it hard to believe in the moment, our new home was still out there waiting for us, and we uncovered it just a couple of weeks later. This isn't just sour grapes, but the new place is a much better fit for us than the near-miss. It's a roomy two-story house with a finished basement, and it's not as ultra-modern as the other potential new house, but it was well-maintained by the previous owners. They lived here for thirty years and raised three children. There were little touches all over the place that made us feel like this house was meant for us: the slate patio, the storage nooks in every corner of the house, the wet bar in the basement, and of course the cat door cutouts. This is home.

(Tomorrow I'll tell you all about the joys of moving. I'm probably being sarcastic.)
Posted by Kevin at 10:48 PM

He's back! I'd gotten so used to seeing that Rick Dempsey that seeing Belanger upon page load was a pleasant surprise. So happy that your house search and move is over and you're getting settled in...and even happier that you're posting again. That was the longest break you've taken since I started reading when you launched in January 2008, and without a new post to read every few days it felt like something was missing.

I've been growing a considerable stack of O's cards and odds and ends thrift store finds I've been meaning to send for my yearly 'subscription fee' but I held off when I saw you were moving (okay, laziness was a big part of the lag, too). I'll be hitting you up via email for your new address so you can add to your collection.