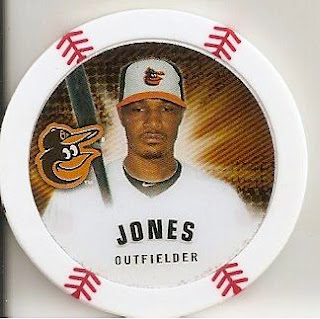 I'm checking back in at the end of a long, busy weekend of domesticity just to assure you that I'm not disappearing for another month. I know that I missed a few Orioles happenings during my recent hiatus; for instance, Adam Jones was selected as the Marvin Miller Man of the Year as part of MLB's annual Players Choice Awards. Adam was recognized by his peers for his contributions both on the field and in the community at large. He's the first O's player to earn the honors since the inception of the award in 1997.

Jonesy doesn't look too thrilled to be included in Topps' poker-chip themed product line, though. Maybe he thinks that the 1990s-esque tactic of spelling "Chipz" with a "z" on the end is asinine, and now he can't stop picturing Chuck E. Cheese wearing a backwards hat and fingerless gloves. Or maybe - speaking of the 1990s - these small plastic discs are reminding AJ of the pogs collectible milk caps that briefly took elementary schools by storm in his youth. He probably had an overly strict teacher who confiscated his pogs, and thinking back on that dark day is really bumming him out. Poor guy.
Posted by Kevin at 9:47 PM