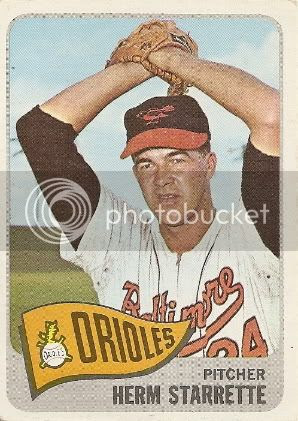 Today is the 77th birthday of Mr. Herman Paul Starrette, a native of Statesville, NC. I've been through Statesville several times en route to Charlotte to visit my in-laws, which is neither here nor there. He did all right for himself in a brief big league career with the Orioles, pitching to a 2.54 ERA in 46 innings of relief from 1963 through 1965. He allowed just one home run as a major leaguer, a two-run shot to Elston Howard on August 4, 1963 at Yankee Stadium. Despite his moderate success, Herm hung up his spikes at age 27 in the midst of the 1966 season, his fourth spent primarily at AAA Rochester. But that wasn't the end of his life in baseball by a long shot. He worked as an MLB coach, minor league pitching coordinator and coach, and farm system director for a number of teams from 1967 through 2002. He coached in the O's system on two separate occasions (1967-1973 and 1988), and also worked with current Baltimore GM Dan Duquette in Milwaukee, Montreal, and Boston. I wonder if Herm might have any pointers for Duke's current pitching staff.
Posted by Kevin at 10:06 PM