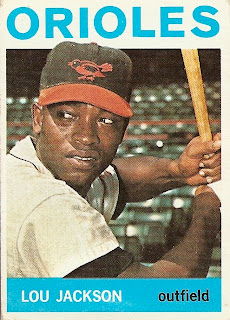 Still doing the long-distance relationship thing, which means that I'm going to be away from my cards and scanner this weekend. Just choosing one card at a time is a challenge for someone as indecisive as me, so picking out three in advance is always a challenge. I figured I'd make it easier on myself by cooking up a theme. There are plenty of cards out there of guys who barely played for the Orioles (or in the case of prospects, never made it at all), so welcome to my "Who In Blazes?" weekend.

I'm kicking things off with Lou Jackson because he was the first unfamiliar face I happened upon when I opened up my vintage Orioles binder. I surfed on over to Baseball Reference and things got interesting, and more than a little tragic.

Lou played college ball at Grambling State University and signed with the Cubs in 1957. He started off in Class C ball, flashing power (40 extra-base hits in 112 games) and hitting .310 for the Magic Valley (ID) Cowboys. He was promoted to the Class A Western League the following year and was even better, hitting .320 and slugging .596 for the Pueblo Dodgers. His performance earned him a pair of callups to the majors, once in July and once more in September. He played sparingly and struggled, with only 6 hits in 35 at-bats (.171). His first - and last - career home run was a two-run blast off of Ray Semproch of the Phillies on August 3, 1958. The following year he returned to A ball, this time with the Lancaster Red Roses of the Eastern League, and was again impressive (.339 AVG, 54 XBH), but this time merited only four big league at-bats in September. He was then passed around like public property, going from the Cubs to the Reds to the independent Toronto Maple Leafs to the Braves to the Orioles.

When the O's nabbed him from the Braves in the December 1963 Rule V draft, he hadn't been in the majors in nearly five years. At 28 years old he still had a lot of baseball left in him, and he'd hit .315 with 31 homers in the previous season at AAA. Baltimore saw enough in him to put him on the major league roster on Opening Day, but used him in only four games. He went 3-for-5 in his only start, May 10, 1964. The Birds won 7-1 that day. The next day, he pinch hit for Stu Miller in the ninth inning and struck out. It was his final major league game.

Jackson spent the rest of the 1964 and 1965 seasons at AAA Rochester, then signed with the Sankei Atoms of the Japanese League. He played for them for three years, including an All-Star effort in 1967: .296/.351/.554 with 28 home runs. The following season, his power plummeted and his average dipped 77 points. He also collapsed at home plate one day, apparently suffering from years of alcohol abuse. By May 1969, he was dead of pancreatitis at age 33. Sadly, there's not much more information about his life available online.
Posted by Kevin at 9:21 PM