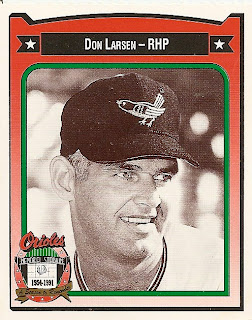 Until Roy Halladay’s dominant performance last night, Don Larsen was the only pitcher in major league history to throw a no-hitter in the postseason. Unless you’ve been living under a lemon-shaped rock, you’ll be familiar with the events of October 8, 1956, when the 26-year-old Yankees righthander pushed the defending champion Dodgers to the brink of elimination with a perfect game in Game Five of the Series. Larsen didn’t exactly come out of nowhere, as he had gone 11-5 with a 3.26 ERA as a swingman that year. But his masterpiece was still incredible, especially considering that he had bombed out in the second inning of Game Two, undone by four walks and a Joe Collins error. Don has maintained in the years since that he did not even know that he would still be starting Game Five until he showed up at Yankee Stadium and found a ball placed in his shoe in his locker.

It’s also worth remembering the inauspicious beginnings of Larsen’s career. He had signed with the St. Louis Browns in 1947 out of Point Loma High School in San Diego, and made his debut in 1953 with the lame-duck big league club. He appeared in 38 games and started only 22, yet led the team with 192.2 innings pitched and seven complete games. His 4.17 ERA was near the league average, but he allowed 201 hits and posted a 7-12 record for the last place Browns. He moved to Baltimore with the franchise the following year, and probably found himself yearning for the days of 7-12. Taking the ball 28 times for the Orioles, he went the distance a dozen times and compiled an ERA comparable to the previous season (4.37). His won-lost record? 3-21. Three. And. Twenty-one. That’s a .125 winning percentage. He led the league in losses, setting an Orioles record that may never be surpassed and making Kevin Millwood’s 4-16 look downright pedestrian. The Birds gave him a whopping 2.59 runs per start and he was on the losing end of nine of his twelve complete games. It takes a strong will to absorb that many L’s.

Of course the O’s dealt Larsen and six other players to the Yankees that December in exchange for Gus Triandos, Willy Miranda, and eight others, and the 6’4” pitcher had a new lease on his sporting life. Spending five years starting and relieving in the Bronx, Don won 45, lost 24 and had a 3.50 ERA. He stuck around the majors for 14 years, won a pair of World Series rings with the Yanks, and even returned to Baltimore late in his career. In 54 relief innings for the 1965 Orioles, he had a 2.67 ERA. On a staff with Robin Roberts, Stu Miller, and Harvey Haddix, he was the fourth-oldest pitcher, which has to be an ego boost for a 35-year-old veteran.

Now 81 years old and living in Idaho, Larsen will probably want to unplug his phone by the end of the day. Still, it has to be nice to be remembered more than forty years after throwing your last pitch.
Posted by Kevin at 10:32 PM