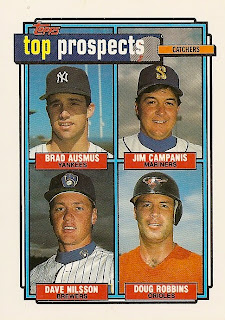 It's never a comforting thing to be the lowest man on a Top Prospects totem pole. Doug Robbins bore that burden both literally, in his bottom right position on the card, and in the scope of his pro baseball career. Brad Ausmus just retired a few weeks ago after an 18-year major league career that included an All-Star selection and three Gold Gloves. Dave Nilsson was the first Australian-born All-Star in MLB history, and hit .284 with 105 home runs in eight seasons. The other two gentlemen were not so lucky.

Jim Campanis and Doug Robbins were both catchers on the 1988 Team USA amateur squad. Campanis' father and grandfather had both played briefly in the major leagues, and Jim seemed poised to join them when he hit .392 with 23 home runs and 92 RBI for USC in 1988. The Mariners drafted him in the third round that year, but he hit .254 in six minor league seasons and never made it past AA. As for Stanford product Robbins, he batted .391 with a 1.055 OPS in the 1988 Baseball World Cup and was drafted in the tenth round by the Orioles. He hit over .300 in three of his first four professional seasons. In 1992, he batted .306 with a .399 on-base percentage at AAA Rochester. At that time, Chris Hoiles was firmly entrenched as the O's catcher, so Robbins was dealt to Oakland. He played only 57 games for AAA Tacoma in 1993, and his average sunk to .226. For some reason, that was the end of his baseball career...until 1996, when the 29-year-old pitched (yes, pitched) 12 games for the Rhode Island Tigersharks of the independent Northeast League. That didn't go so well, as he allowed 72 baserunners in 31 innings and surrendered 39 earned runs (a 11.32 ERA). That would be the true end of Doug Robbins' time in baseball.
Posted by Kevin at 3:45 PM