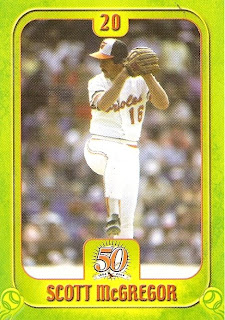 On an absolutely frigid day in the mid-Atlantic, it's as good a time as any to reminisce about one of the all-time great Orioles teams. I just remembered a decrepit old photo album stuffed in a box in my closet. In that album are ten pictures of the 1979 Orioles, photos that my Aunt Denise snapped at a rally for the team that autumn in downtown Baltimore. In the process of scanning them, I discovered that they're a little worse for wear, but I still think they're worth sharing. Enjoy!

Dave Skaggs and Rick Dempsey prepare to catch some tosses as Cal Ripken, Sr. and other team personnel observe.

El Presidente! Dennis Martinez is ready for his closeup.

Elrod Hendricks flashes the smile that made him the goodwill ambassador of Orioles baseball. There's also a rear view of Jim Palmer...ahem.

Check out the banner behind Mike Flanagan: "Go to bat for the Birds."

It would be a shame for Don "Fullpack" Stanhouse to hide that outstanding hair underneath a cap. (ETA: A subsequent email from Ed brought it to my attention that this is probably Steve Stone.)

Do you suppose Ken Singleton is signing one of his baseball cards?

There's a lot of funny business going on for Scotty McGregor. His eyes are obscured by his cap. Speaking of the cap, that can't be an official Orioles uniform piece. The Bird looks grotesque and distorted. Then there's the WJZ Channel 13 jacket with yellow t-shirt underneath. Why was the young lefty out of uniform? Did his luggage get lost?

A great picture of Tippy Martinez, with Cal Senior in the background.

To close things out, who else but "Brother Lo", a.k.a. John Lowenstein?
Posted by Kevin at 9:09 PM

That..sent chills up my spine...

Those pictures are awesome! Its great to see some candid shots of the players I idolized as a kid.

I'm guessing this would have been a rally before either the playoffs or the World Series if you say this was in the fall.

Given it looks pretty cold, I'm guessing it might have been a rally before the World Series since the first game of the Series ended up being postponed due to snow.

Those are incredible pictures! Thanx for sharing Kevin.

Wow! Great pics! All my favorite O's from that era. Tippy, Lo and Elrod! Great stuff, Kevin. That's a smile on Eddie's face. Makes that a very rare photo.

Beautiful. Brooks was my idol, but the '79 Os were the team of my childhood.

oh my god Kevin, those pictures are fantastic!

Excellent photos! I loved Tippy as a kid. I even named a dog after him.

In case anybody wants to see where in downtown Baltimore these photos were taken click here You can see that pentagonal building and the ship in many of the photos.

Was this where the visitor center is now on the Inner Harbor? It looks like it.
Was John Lowenstein in the witness protection program?

It is me again, the Anonymous guy who loves the '65 set.
I was there the day these photos were taken. April 1979. Rally as the Orioles returned from Spring Training. At location where Light St. Harborplace is now and the area had been cleared to get ready for construction.
(Mel Nelson would never had a card in most years as he did in '65save for the lack of of players because of the Fleer signing I mentioned in the Fosnow comments. The Twins must have been hit hard by the signing of guys to non-Topps contracts.)

Was just perusing Google looking for memorabilia prices, on some stuff my dad sent me for my kids' school auction. I'm Tom Shopay's daughter, and just wanted to say thank you for this walk down memory lane - like a snapshot of my childhood! Very cool...

I recently came accross your blog and have been reading along. I thought I would leave my first comment. I dont know what to say except that I have enjoyed reading. Nice blog. I will keep visiting this blog very often.

I love these photos! Interesting cap McGregor's wearing in that '79 shot at the rally... turns out it might be a peice of official Oriole gear.... Dave Skaggs is wearing a similar "distorted bird" helmet in his 1980 baseball card - http://1980toppsbaseball.blogspot.com/2009/12/211-dave-skaggs.html

I play some good prize draws but never tried any lotto.For example now I'M waiting for draw to win 50-Euro Million ticket. Thank You for such a nice post.

In principle, a good happen, support the views of the author

Where is a autographs of a players do you have any?
Plastic Card Printing