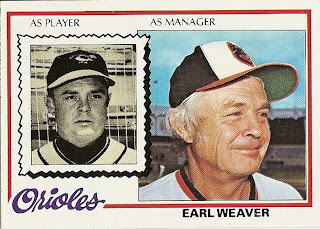 If you enjoy reading my blog (and I hope you do, otherwise why torment yourself?), I certainly hope that you've clicked the links to your left, which will take you to other baseball card blogs that I enjoy for a variety of reasons: good, insightful writing, quick wit, beautiful visuals, and unique subject matter are all at the top of my list. In case you're not the type to just click around blindly, I can give you that extra prod to visit one of the newest links on my blogroll: 78 Topps Cards. It's the newest project from the bright and prolific Andy, who recently finished his first foray into set blogging, 88 Topps.

Both blogs are similar, in that they take a card-by-card, in-depth look into a couple of the more colorful sets produced by the once-venerable Topps (okay, so I'm still a little bitter about the company's recent missteps). Having tweaked his format, Andy is bringing lots of great new ideas to the plate for 78 Topps, which just launched proper last week. There are running counters of all of the Hall-of-Famers, deceased players and managers, first-or-second-genrations guys, All-Stars, and award winners featured in the set, as well as fun facts and an aesthetic appraisal of the cards. You can vote on your favorite cards, and you'll even have a shot to win several giveaways!
So give 78 Topps Cards a look. The set itself is a thing of beauty, full of minimalist card design (all of the hot pink and bright green borders aside), memorable players of yesteryear, and 1970s fashion. In the meantime, I'm going to get a jump on Andy and take a look at one of the cooler concepts of 1978 Topps, the manager cards. This is the only year that I can recall Topps using a "then and now" format for its treatment of the skippers, showing a small black and white inset photo from their playing days. You get Joe Torre as a slightly uglier, powerful catcher with the Braves. Sparky Anderson as a slightly alien-looking, weak-hitting Phillies infielder. And a true rarity, Earl Weaver as a career minor league infielder who idolized Cardinals shortstop Mary Marion and who looks something like a fire hydrant. But flipping the card over will provide the real treat, and I'm kicking myself for not scanning the back. (Maybe I'll add that in later, note to self.)


On the card back, Topps provides Earl's full minor league batting record! He was a 5'7", 180-pound scrapper who played parts of thirteen seasons (1948-1960) in the bus leagues before seeing the writing on the wall and hanging up his glove and bat for good at age 30. He wasn't a bad hitter per se, averaging .267 and topping out at .288 in 1957. But those numbers weren't opening anyone's eyes at the big league level. But if you dig deeper, there are some fascinating numbers in his stat line.


First of all, a nineteen-year-old Weaver hit .282 and drove in 101 runs in 1949 for the St. Joseph, MO Cardinals of the C-level Western Association. But he had just two home runs - I'd say he earned all those RBI! Also, Earl began managing in the minors in 1956, but continued playing in some capacity through 1960 (when he had 30 at-bats in 28 games for the creatively-named Fox Cities Foxes, the B-level club for the Orioles). Finally, in 1965, the 35-year-old manager appeared in one game for his AA Elmira Pioneers: he did not bat and was ostensibly a late defensive substitute.


As you can see, Earl had quite a long and circuitous path to the major leagues. By the time the Orioles added him to Hank Bauer's coaching staff in 1968, he had played in 1427 minor-league games and managed in 1,538 contests - some of those overlapping! It must have made his four American League Championships, one World Series title, and 1996 Hall of Fame induction all the sweeter.
Posted by Kevin at 3:29 PM

Earl!!! I just love the guy, always will. I was fortunate enough to have met him a few times. The first was at the baseball winter meetings in Houston in 1973. I had finagled press credentials from the college paper and skipped a week of classes to hang out with all the baseball bigwigs.
The highlight was a press lunch that I attended and sat down at Earl's table. He had some great stories. I brought up an Oriole-Yankee game from 1970 that had been the best regular season game I had ever seen. Earl picked up the game story from me and went on and on about that game. (I've told that game story here I think). What a fun day that was.
Some years later I was waiting for my bags at the airport here in Houston when a couple of brown tweed bags wit embroidered Oriole emblems emerged. I was amazed to see the guy next to me reach for them! It was Earl. I spoke to him and he was genuinely interested in talking to an Oriole fan in Houston. He even remembered (or so he said) the press luncheon discussion from several years before.
Kevin, thanks for featuring Earl today. What a great guy and greater manager.

I've gone on record as saying that the '78 Topps manager cards are the best manager cards of all-time. I don't to hear any arguments!

Thanks for the thorough and excellent shout out!