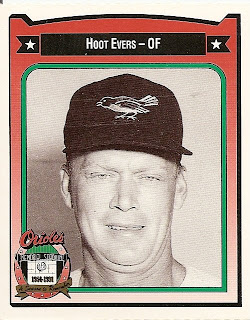 I've owned this card of 1950s part-time outfielder Walter "Hoot" Evers since childhood, and I've long thought it to be one of the ugliest in my collection. Just take a peek at those watery, squinty eyes. That slack-jawed leer. Those multiple chin folds, which approach - but do not surpass - the rubbery glory of Ed Lynch. The near-hairlessness of his entire head. My friends, this is one spooky-looking specimen. But it has nothing on the Undisputed King Ugly of my collection, card number 444 from the 1989 Topps set. The man, the myth, the gargoyle: Moose Stubing.

I am not exaggerating when I tell you that this card used to send my sister and I into hysterics. Now, sure, Moose ain't no Monet, but is he THAT ugly? Hmmm, he did the trick for us. Check out those milky, off-center eyes, the gapped, peg-like yellow teeth, the splotchy, sun-creased skin...not to mention the cheesy mesh-backed baseball cap. Anyway, at some point, probably between the ages of eight and eleven, I came across this piece of work, and shared it with my sister. Soon, it became a game of sorts. One of us would hide the card somewhere that the other was likely to find it. My sister might stash it in one of my books, or I'd secret it away in one of her clothing bins. Then, the unsuspecting victim would uncover it, and fling it away, screaming, "AAAAAAAUUUUUGHHHHH! MOOOOOOOOSE!" Yes, really. He was our Boogeyman. Still, we'd usually have a good laugh at the same time.

A major league player with no hits became a major league manager with no wins? That zipped right by tragic and went all the way to amazing. That's a hell of a trivia question right there.

My brothers and I would do the exact same thing with our "boogeyman" cards as you and your sister did. But we're quite a bit older, so for us it was 1975 Bruce Ellingsen or Gene Locklear.

Night Owl - After checking those cards out online, I see your point. Ellingsen reminds me of a line from the MST3K treatment of Eegah - "He looks like a Cabbage Patch Elvis".

...but Moose Stubing has a great personality.

Billy - Karl Best never bothered me. Carl Willis, on the other hand...and Don Mossi, that's a card I have to get. It's the Mona Lisa of baseball cards.

William - And a great sense of humor.