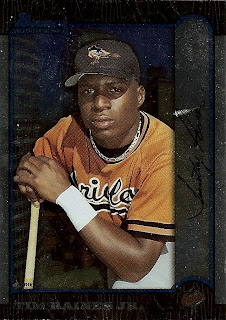 Man, these foil cards sure do scan like crap. Anyone have any special tricks they can recommend?

Anyway, this card reminds me of a lost period in my Orioles fandom. For my first few years of college, I had very little to do with the Birds. I was preoccupied with plays, classes, girls, living away from home for the first time...lots of stuff. Let's face it, the O's were in the early dark stages of their decline, still cluelessly banking on aging veterans. Cal Ripken, Jr. and Brady Anderson were at the end of the line, and Mike Mussina was bound for Yankee Stadium. There wasn't much to miss.

So it was that Tim Raines, Sr. and his son played side-by-side in the Orioles outfield, and I didn't even know about it.

Let's acknowledge this for what it was: a desperate grab at publicity by a terrible team (63-98). The younger Raines was by no means comparable to Ken Griffey, Jr., the only other man in major league history to team with his father. But still, the elder Raines was a true legend and absolutely should be elected to the Hall of Fame in the next few years. It would have been cool to have seen him play in Baltimore, even if it was at the end of his career and just for a few games (four, to be exact). At age 41, "Rock" didn't embarrass himself. He was 3-for-11 (.273) with a home run and five RBI for the Birds.

That's one of the great things about baseball. 162 games might be a long and sometimes monotonous commitment to make, but you never know what might unfold before your eyes...or what you might miss if you tune out.
Posted by Kevin at 9:18 PM

I just read that Tim Raines Sr took the job as the manager of the Newark team in the Atlantic League. He was with Harrisburg last year as a hitting coach I think.

Deal - You know, that was the news that prompted me to write this entry, and I'd completely forgotten about it by the time I started typing. It's hell getting old. ;-)