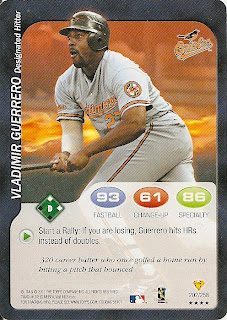 I don't play Topps Attax myself, mostly because the substitution of the letter "x" for "-cks" offends my English major sensibilities. But if you can read the small print on Vladimir Guerrero's Attax (ugh) card, you'll see that he gives his card player a perk: if you are losing, his doubles turn into home runs. Clearly the folks at Topps didn't see Vlad play in Baltimore. The aging designated hitter slugged just 13 home runs in 2011, his lowest output since he hit 11 in 90 games as a rookie in 1997. Of those 13 homers, a whopping 3 either tied the game or gave the Orioles the lead. That's just what you want from a cleanup hitter, right?
Posted by Kevin at 9:23 PM