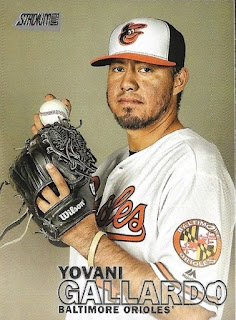 Man, one look at Yovani Gallardo's weary, lightless eyes and flat grimace tells you just how excited he was to be in Baltimore. Maybe it had something to do with waiting until the end of February to get a contract - one that came in one year and several million dollars lighter after the famously unforgiving team physical raised some red flags. Or perhaps he realized that pitching in the American League East wasn't shaping up to be a beneficial career move. It's also possible that he stepped in his dog's water bowl on the way out the door that morning. We've all been there, right?
Posted by Kevin at 11:29 PM

My partner and I absolutely love your blog and find many of your post’s
to be exactly what I’m looking for. Do you offer guest writers to write content in your case?
I wouldn’t mind creating a post or elaborating on a lot of the subjects you write in relation to here.

Amazing! Its really awesome paragraph, I have got much clear idea concerning from this post.

Thank you for your post, I look for such article along time, today i find it finally. this post give me lots of advise it is very useful for me. nice i like it.