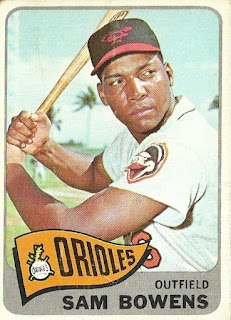 On this date in 1964, Sam Bowens had a very memorable game. The Orioles were hosting the Twins on a Friday night, and what looked like a pitcher's duel on paper never materialized. Minnesota jumped all over Steve Barber with four first-inning runs on five hits, capped by a two-run double from catcher Earl Battey. The O's immediately cut that lead in half, as Jackie Brandt delivered a two-RBI single off of Jim Kaat in the bottom of the first. Bowens hit a solo homer the following inning, but Barber gave the run back in the top of the third when Harmon Killebrew drove in Vic Power with a single. Brandt scored on a wild pitch in the fifth, making it 5-4 Twins. The bullpens took command for a while, as Wes Stock and Dick Hall combined for five shutout innings of relief for Baltimore. Gerry Arrigo replaced Kaat to start the sixth, and was still on the mound as the Birds took their last swings in the home ninth. Brooks Robinson and Boog Powell each struck out, leaving it all up to Bowens. The rookie right fielder belted an Arrigo offering over the left field fence for the game-tying home run, his second of the game and third extra-base hit overall (he'd also doubled in the fourth inning). Bill Fischer relieved Arrigo for the Twins, but had a short and unsatisfying night of work: O's catcher John Orsino gave the Memorial Stadium crowd a thrill with a walkoff four-bagger, likewise to left field. Orioles win, 6-5, improving to 21-12 and maintaining their half-game lead atop the American League.
Posted by Kevin at 11:55 PM

Heady days indeed. I love the 65 Orioles Topps cards...the logo was back and the colors just worked beautifully..