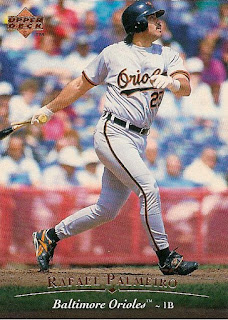 Before he was finger-pointing, earplug-wearing, Tejada-blaming twilight-of-his-career Rafael Palmeiro, he was just Raffy, and he did a lot of impressive things in an Orioles uniform. But #25 only had one 40-homer season in Baltimore. Same goes for Frank Robinson, Jim Gentile, Brady Anderson, and Nelson Cruz. Within the past week, Chris Davis became the first player in franchise history to hit 40 home runs in two different seasons. Last night, he slugged his 41st in the top of the ninth to give the O's a 2-1 win in Yankee Stadium. Tonight, "Crush" was held in the ballpark, but still came up big in a series-clinching 5-3 win in the Bronx. He singled, doubled, and walked twice, driving in the team's first run and a crucial ninth-inning insurance tally. There hasn't been much worth celebrating in Birdland over the past month, but Chris Davis continues to inspire awe.
Posted by Kevin at 11:08 PM