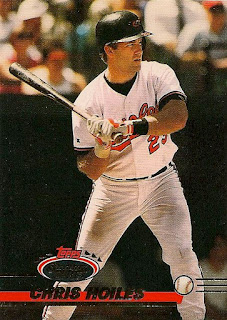 Last night Chris Davis caught - and then passed - Chris Hoiles for 11th all-time on the Orioles' home run leader board, and he did so emphatically. The man they call "Crush" first brought the O's back from an early 4-0 hole with a game-tying two-run homer in the third inning that hit the center field batter's eye wall on a bounce, traveling 438 feet from home plate. Then, after Jonathan Schoop's two-run shot in the bottom of the ninth wiped out a 6-4 deficit, the game dragged on into the 11th. A weary Davis jumped on a 3-0 offering from Rays reliever Matt Andriese and nearly hit the right-center field scoreboard with his 38th home run of the season and his 152nd since joining the O's in late 2011. The titanic blast had six seconds of hang time, enough for the ball to travel 459 feet. It was also the brawny first baseman's 90th homer at Oriole Park at Camden Yards, pushing him past Melvin Mora for fourth all-time. There's no shame in being chased down by Chris Davis.
Posted by Kevin at 11:59 PM