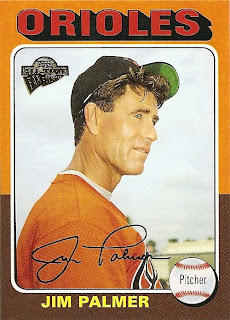 This card arrived a few weeks ago in a bundle from Andy, the mastermind behind the enjoyable and informative '88 Topps blog. If you're unfamiliar with All-Time Fan Favorites, it's a set that Topps released from 2003 to 2005, highlighting the best players in each team's history on designs from past Topps issues. These aren't reprints; they've just taken different photos from their archives and created new cards in an old style. The card backs feature the player's statistics only from those years that he spent with the featured team. It's a neat way to allow collectors to pull some vintage stars and vintage designs out of brand new packs.

Now, I mentioned that these cards use era-appropriate photos for the players. Mike Cuellar appears on a 1969 Topps-style card clean-shaven. Cal Ripken, Jr. has gray around his temples on his 2000-styled card. So when I took a closer look at this card, I did a double-take. As you may know, the design is taken from the colorful 1975 Topps issue. But you might notice that Jim Palmer is wearing a solid black cap, with the ornithologically-correct bird logo that didn't make an appearance until 1989. It might be harder to tell, but he's also wearing an orange practice jersey with the newer-style "Orioles" script (it's longer and thinner than the graphic used during Palmer's career). More apparent are the creases on Palmer's face; known for his dark good looks during his playing days, here he looks significantly older than he did on his actual 1975 Topps card. I think I'm onto something of interest here.

You might remember me writing about Jim Palmer's aborted comeback attempt during Spring Training in 1991, some seven years after his retirement (and months after his enshrinement in the Baseball Hall of Fame). I am reasonably certain that the photograph on this card was taken during that very brief time in which the 45-year-old legend was in camp with the Orioles! I don't doubt that it was big enough news for Topps to dispatch a photographer to get some shots of him for their end-of-season Traded set (or maybe even their brand-new Stadium Club set!). With the then-ongoing boom of the baseball card market, few things would have created such a buzz as the first current-issue Jim Palmer card since 1984.

Now I'm still making something of an assumption here, but nonetheless this is one cool card that was worth the twelve years that the photo sat unused in Topps Central.
Posted by Kevin at 11:51 AM

I agree that this has to be taken from when he was in Spring Training for his comeback.

I've wondered why it seems that for most of the cards in the Fan Favorite sets Topps tried to find an image that would have been taken around the time of the particular design they used,but for some cards like this Palmer card, the picture is obviously way off in terms of being close to the year of the design that was chosen. It would have been better if they had used the 1991 design to make this more like the update card that never was if they wanted to use this picture.

I would have to guess that it's a rights issue, i.e. Topps may have made some kind of deal with Palmer that prevented them from using period images of him--who knows.

BTW Kevin, nice writeup, especially use of the word "ornithologically"... :)

JC Helf - I agree. I noticed that one of the Brooks cards (1964 design) has him wearing the elastic waistband, which they didn't introduce until he was nearing the end of his career in the 70s.

Andy - Thanks! I shocked myself by spelling that word right on the first try. My English degree is finally paying off. ;)

Nice catch with the Palmer card. I was wondering if there were any cards with images from his comeback attempt, and now I know that there is at least one.

Wow, that's the first I've heard of the Fan Favorites set (I'm a collecting dropout). Sounds like something I would like to get my hands on. eBAY, here I come.