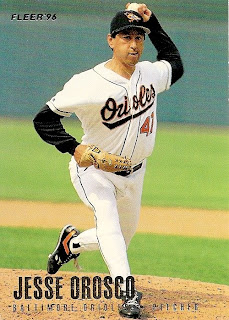 Last week, Julio Franco announced his retirement. He had been playing in Mexico this year, but played major league baseball through 2007, at which point he was (at least) forty-nine years old. Franco was an amazingly conditioned athlete, and made his major league debut a few months before I was born. He brings to mind Baltimore's own ageless wonder, lefty relief specialist Jesse Orosco.

Orosco was thirty-eight by the time he arrived in Charm City in 1995, and had already had a remarkable career that included World Series triumphs with the Mets (1986) and Dodgers (1988). He famously saved Game 7 of the 1986 World Series, jumping for joy as the final out was recorded. But there were plenty of pitches left in the southpaw's arm. He led the American League in appearances in his first season here, though those 65 games pitched would actually be his low-water mark as an Oriole. Orosco was the quintessential LOOGY (Lefthanded One Out GuY), throwing no more than 56 and two-thirds innings during those years. But he was damned good at what he did, striking out 241 batters in his 243 and one-thirds innings with a 3.37 ERA while wearing orange and black. Once again, he did this between the ages of thirty-eight and forty-two.

When he was really in a groove, there was nothing more enjoyable than watching Orosco shut down hitters that were young enough to be his children. You just got the sense that he could keep playing forever. In reality, he lost his effectiveness in 2003, bouncing from the Padres to the Yankees to the Twins, the team that had originally drafted him in 1978 and traded him the next year to the Mets for Jerry Koosman (!). Jesse finally called it quits at age forty-six, and he still holds the major league record for games pitched with 1252 (all but four in relief) in his twenty-four-year career. There are plenty of other fun facts to underscore the ridiculous persistence of the man once referred to by Alan Mills as "the Old Indian". On his Baseball Reference page, there are twenty-seven transactions listed. According to the endlessly entertaining Oracle of Baseball, you can jump from Babe Ruth to Orosco in three steps, largely thanks to Ed Kranepool, a teammate of Orosco's with the 1979 Mets.

It's always bittersweet to see a player that you've followed for most of his career call it quits, but I'm starting to see guys retire whom I remember as rookies, the Ryan Kleskos and Shawn Greens. I'm still hoping against hope that Mike Piazza has another season or two left in him.
Posted by Kevin at 10:28 PM

It is depressing to see players we've grown up watching [I'll be 22 in a few weeks] call it quits. You slowly see it happen -- first it's Barry Larkin, then Greg Vaughn, then Craig Biggio, and pretty soon you're excited when you see Damian Easley is still in the league. I think the moment I realized I was getting older in comparison to the players was when I went to a Phillies/Reds game and got an autograph of Bill Bray -- at the time he was 23 and I was 19. Now I'm pulling cards of 20 year-olds and suddenly Julio Franco, the only thing more constant than taxes, calls it quits.