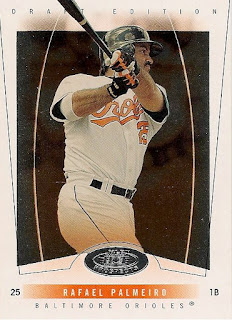 Here's a story that broke while I was out of town the weekend before last: Rafael Palmeiro's return to pro baseball.

A full ten years (plus a couple of weeks) after playing his last MLB game with the Orioles, the most overlooked member of the 3,000-hit club signed a contract with the Sugar Land Skeeters of the independent Atlantic League. How a team from Texas fits into the Atlantic League is a question for another day. I'm more interested in the fact that Palmeiro was back on the field at age 50 to play alongside his son Patrick, aged 25. The younger Palmeiro was drafted by the White Sox in 2012, but batted only .227/.277/.365 in three seasons in the low minors. He's spent all of 2015 with the Skeeters, putting up a line of .256/.315/.404 in 128 games, with 13 home runs and 68 RBI.

As it turned out, Raffy played a single game for Sugar Land, batting third and pulling DH duties. He went 2-for-4 with a walk and an RBI. Patrick batted ahead of his father in the two-hole and started at third base. Patrick turned in a 2-for-5 effort with a walk, a double, a homer, and four RBI. I'm sure the lineup protection afforded by one of the best lefthanded hitters in the history of baseball - one who just happens to be his father - made it all possible.
Posted by Kevin at 5:44 PM