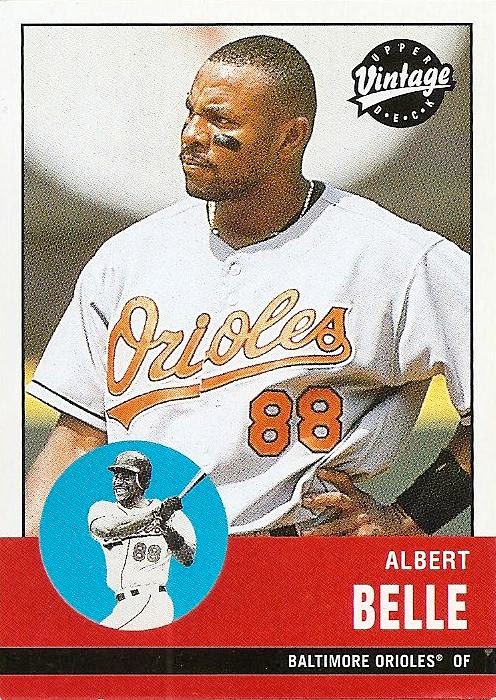 In case you've forgotten, Albert Belle was an intensely terrifying athlete. Thanks to Deadspin, some  video evidence to that effect is making the rounds this week. The video shows highlights from the Orioles' home game vs. the Angels on July 25, 1999, the much-maligned "Turn Ahead the Clock" promotion that put both teams in pullover jerseys with itty-bitty sleeves and vertical name plates, among other fashion don'ts. In his first five trips to the plate, the mercurial slugger had gone 4-for-4 with a walk, three home runs, and six RBI. Albert was almost singlehandedly responsible for keeping the O's alive into the 11th inning, considering that the score was 7-7 after nine innings. His three-run homer in the seventh erased the bulk of a 7-3 deficit, and his first-pitch solo shot off of Troy Percival tied the game with two outs in the bottom of the ninth. His final plate appearance came with one out in the 11th, after B. J. Surhoff's walk put the winning run on first base. Shigetoshi Hasegawa was brought out of the bullpen to relieve Mike Holtz, and his second pitch ran high and inside. Home plate umpire Ed Hickox ruled that the ball struck Belle, but the right fielder...refused to take his base. That's how locked-in he was, and how intent he was on winning the game. After some tense moments at home plate, manager Ray Miller and coach Marv Foley convinced Albert to yield. Three batters later, Cal Ripken capped his own impressive game (3-for-5, 2B, HR) with a walkoff single through the left side. Go check out the video, and consider yourself lucky if you've never run afoul of #88.
Posted by Kevin at 9:48 PM

That was fantastic! Thanks for the link. Belle was a true badass, in every way possible.