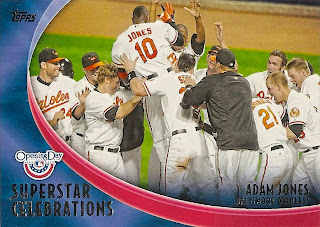 This card depicts the mob scene at home plate following Adam Jones' first career walkoff home run on May 24, 2011. On that occasion, he took a Joakim Soria offering deep to center field for a tie-breaking two run homer in the bottom of the ninth.

Thanks in large part to the continued heroics of Adam Jones, the Orioles just took two out of three from the Phillies, including extra-inning wins in each of the past two games. Yesterday evening, the O's center fielder made the fans wait until the twelfth inning before delivering a two-run homer to give the club a 6-4 win. It was Adam's third game-winning home run in extra frames this year, as he also helped stop the madness in the 17-inning marathon in Boston and the 15-inning slog in Kansas City. Today's game was a relatively brisk 10-inning affair, and again Jones scored the winning run. This time, he hit a smash to third base that former teammate Ty Wigginton couldn't handle. That set the stage for Matt Wieters, who drove a Joe Savery pitch off of the right field scoreboard to drive #10 home. That's a 5-4 final and the Birds' franchise-record ninth consecutive extra-inning win. After a recent stumble, Baltimore is hanging strong at 34-26, a single game back of first-place Tampa Bay. Rumor has it that Brian Roberts will be activated from the disabled list on Tuesday.

wow a Chuck Thompson reference. Hopefully some Phils @ O's pix will be up at Phungo in next 24 Hrs.

Deal - Just took a look at the pictures. They look great! Sorry you didn't get to see a Phillies win...but not too sorry, obviously. ;)