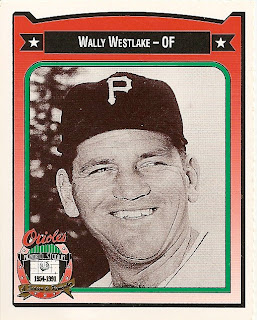 Before I move away from my recent all-1991 Crown/Coca-Cola format, I have to make a correction to yesterday's Dave Philley entry. Reader Russell sent me an email pointing out that Eddie Robinson is not actually the oldest living Oriole. Outfielder Wally Westlake, who had an 8-game cameo with the O's in 1955, was born on November 8, 1920 and is still with us. That makes him one month and seven days the senior of Robinson. That's what I get for taking Roch Kubatko's reporting at face value. (Sorry, Roch!)

Anyway, Wally Westlake was a Californian by birth and was 19 when he signed with the Brooklyn Dodgers in 1940. He lost three years of his pro career to military service during World War II, but remained stationed in California for the duration. He later referred to himself sarcastically as a "Broadway soldier". After being dealt to the Pirates, Wally reached the majors to stay in 1947. He was remarkably consistent during his first four seasons, batting between .273 and .285 and peaking with an .852 OPS in 1950. He had 23 homers and 104 RBI in 1949 and 24 homers and 95 RBI the following year, making him the only power threat on those dismal Pittsburgh clubs other than future Hall of Famer Ralph Kiner. He was dealt to the Cardinals in June 1951, and made his only All-Star team that season.

After retiring from baseball, Wally had a sales job with Tidewater Oil but eventually found more satisfying work as a lead laborer for the A. Teichert & Sons Construction Company. The outdoor work suited him, and the timetable left him free to fish and hunt in Northern California during duck season. At last check, the 91-year-old is still living in Sacramento, the city he's called home since the age of 6.
Posted by Kevin at 8:46 PM