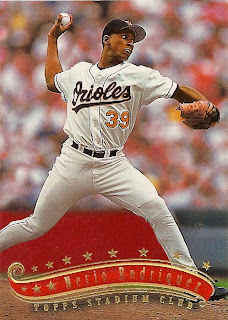 We are 31 days away from Opening Day, and that's just not soon enough for my tastes. After all, here I am commenting on Nerio Rodriguez's 41st birthday. The Dominican righthander had an unconventional career trajectory. The White Sox originally signed him as an international free agent in 1990, and he was a catcher until 1995, when the O's converted him to pitching shortly after picking him up in the minor league phase of the Rule 5 draft. In 1996, he had a 2.26 ERA at Frederick and narrowly missed qualifying for the Carolina League ERA title; with another two-thirds of an inning under his belt, he would have had the lowest mark in the league. He had a few strong outings at Rochester, and debuted with the Orioles in mid-August. The rookie appeared in 8 major leagues with uneven results, finishing with a 4.32 ERA in 16.2 innings.

After a full season at AAA in 1997, Nerio got a September callup to Baltimore and again got knocked around a bit, but earned his first two big league wins: One in relief on September 20 and a start three days later in Toronto. In the latter, he beat Roger Clemens, who was seeking his 22nd win for the Blue Jays. He wound up being dealt to the Jays the following summer for veteran pitcher Juan Guzman, and was hit hard in short stints in Toronto in 1998 and 1999. His only other major league experience came in 2002, when he threw in a game for the Indians and in two more for the Cardinals. Believe it or not, Rodriguez was still an active player as of 2011, when he appeared in 16 games for two teams in the Mexican League. Judging from his 7.64 ERA, his best days may be behind him. But he did have a few standout seasons south of the border late last decade, including a 17-3 record and a 2.54 ERA for the Acereros de Monclova in 2008.

His Mexican exploits are all well and good, but Rodriguez's lasting legacy may be his status as the only "Nerio" to ever play Major League Baseball. There have only been two other players with that name in affiliated pro ball, and the only active one is shortstop Nerio Rios, who is still in rookie ball in the Phillies organization.
Posted by Kevin at 10:22 PM

I came across a card of his this weekend while looking through my binders. I wondered what became of him. Now I know!

Ryan - Glad to be of service.

Oriolephan - You're on the links list on the left side of the page. Good luck!