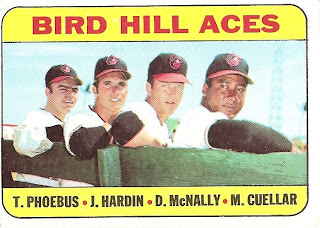 Time to take a quick breather from Wietersmania to focus on a subject recently approached by the delightful Dinged Corners: multi-player combo cards. When I received this card a year or so ago, I thought it was pretty nifty, but curious. When you think of great O's rotations from the glory years, it seems inexcusable to exclude Jim Palmer. But he had just missed most of 1967 and all of 1968 with arm woes, so Topps can be forgiven for not guessing that he'd come back to win 245 more games in the ensuing sixteen seasons. But what about the guys who made the cut? Sure, Tommy Phoebus was a local kid, and he even no-hit the Red Sox in 1968, but was he really an "ace"? Then there's Jim Hardin, who I couldn't tell you anything about without first checking an encyclopedia. Then again, I could just read the text on the back of the card, which goes a long way toward explaining why this particular quartet were featured.

Dave McNally, of course, was the veteran of the group. 1969 would be his eighth season with the Orioles, and after gaining national attention with his World Series-clinching shutout in 1966, he fully realized his potential in 1968 with 22 wins (trailing only Denny McLain's 31), 10 losses, and a 1.95 ERA (third-best in the Year of the Pitcher). He led the American League with a 0.84 WHIP(!) and was still only 26. He would run off three more consecutive 20-win seasons, including a league-best 24 in 1970 and a 21-5 record in 1971, the year that the Birds boasted four 20-game winners. Ace? Yes.
Mike Cuellar had just arrived in Baltimore via an offseason trade with Houston. In what amounted to Cuellar-for-Curt Blefary, the O's got away with murder. The Cuban screwballer had amassed a ho-hum 36-32 record in three full seasons in the Astros rotation, but his peripherals were good and a great supporting cast in Charm City made all the difference. Mike went 23-11 with a 2.38 ERA and 1.01 WHIP in his first Oriole season, and (just like McNally) posted four 20-win seasons in orange and black, three of them consecutive. His 24 victories in 1970 tied McNally for the league lead, and he twice topped the Junior Circuit in winning percentage. In each of his first seven seasons with the club, he completed at least 17 of his starts, including an A.L.-best 21 in 1970. Ace? You bet.
Hindsight is 20/20, but at the time this card was printed, Tom Phoebus looked like another great Oriole pitching find. The unibrowed hometown boy had gone 14-9 as a rookie in 1967, and followed up with a 15-15 mark in his sophomore season. His 2.87 ERA was none too shabby, and of course there was the April 27 no-no against Boston. Nine strikeouts, three walks? Yes, please. 1969 was more of the same, a 14-7 record and a 3.52 ERA that was higher, but still better than average. Curiously, he earned only ten decisions in 21 starts in 1970 (5-5), but boasted a 3.07 ERA and a relief win in the World Series that fall. The Birds struck gold by trading Tom that offseason for Padres pitcher Pat Dobson, the missing link of the four 20-game winners in 1971. Phoebus lasted just two years in the National League, winning another half-dozen games. Ace? It didn't turn out that way, but apparently life is still good for Tom.
Righty Jim Hardin was the youngest of this foursome, and he too seemed to be on the rise. After going 8-3 with a 2.27 ERA in half a season in 1967, the slim Tennesseean racked up 18 wins against 13 losses with a 2.51 ERA the next year. He seemed durable, going the distance in 16 of 35 starts. But after being slotted into a swingman role, Jim was less effective in 1969-1970 (12-12, 3.57). On the plus side, he did hit a walkoff home run against former Oriole Moe Drabowsky in 1969! As with Phoebus, Hardin was traded in 1971 and out of the majors within two seasons. Ace? Nope, but it's not he was no slouch for a few years there.
So all four of these guys may not have won 20 games year after year, but two of them did, which isn't a bad success rate in baseball. This card certainly isn't cringe-worthy like this 1993 Upper Deck Cardinals team card spotlighting Geronimo Pena and Bernard Gilkey. Yikes.
Posted by Kevin at 3:41 PM

It seems obvious why these 4 were pictured. They were the top 4 starters at that time. After 1966, Palmer, Bunker, (and even McNally) came down with sore arms and missed significant time. Tom Phoebus was the de facto staff ace in 1967. I think McNally came back in '68, and Cuellar came over in '68 also. Palmer's future was still up in the air during the 68/69 off-season. Pat Dobson hadn't arrived yet. 67 & 68 were not "glory years".