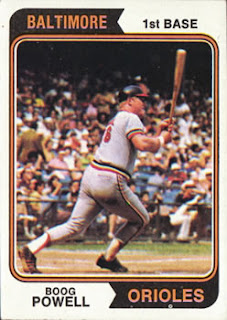 One of the things that I've missed most during my recent blogging hiatus is the Vintage Fridays feature. It has been nine months since I've featured a pre-1981 card on this site, and it is my firm belief that old cards are the best. So let's make things right with good old Boog, and recap my most recent meeting with the 1970 American League MVP.

As I recently mentioned, I celebrated my 35th birthday last August 5 with a family trip to Oriole Park at Camden Yards. There were four of us in all - my sister, my wife Janet, our son Finn, and myself. The O's were kind enough to give out Jonathan Schoop bobbleheads for the occasion. After we collected our freebies, we headed down Eutaw Street for some pit beef. As is often his wont, Boog Powell was holding court in front of his eponymous barbecue stand, seated on a tall chair with an umbrella for shade. I couldn't pass up a photo op on my special day, so we waited in Boog's line before getting our sandwiches. Number 26 was gracious as always, and even tried to give Finn a high-five. Unfortunately, my baby boy had stopped paying attention by that point. But before he lost interest, we did get this excellent picture. 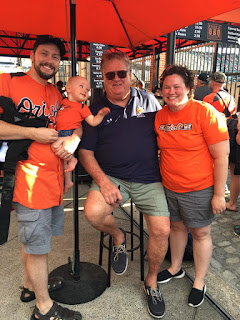 It's not really apparent from the photo, but I was wearing my Danny Valencia game-worn jersey...because he was #35 during his 2013 stint in Baltimore. And because you're probably wondering, yes, Finn enjoyed the pit beef. We're trying to raise him right.
Posted by Kevin at 9:25 PM

Finn looking up at Boog at the last second is super cute.

Haha, I think so too. Or as someone said on facebook, "Get you someone who looks at you the way that kid looks at Boog".